When Japan last hosted a round of the World Rally Championship in November 2008, Sebastien Loeb clinched his record fifth world crown. Two years later and the WRC circus returns to Sapporo, on the northerly island of Hokkaido, for round 10 of the season where it's conceivable that Loeb could secure his seventh consecutive title, providing he wins and his closest rivals finish outside of the top seven. 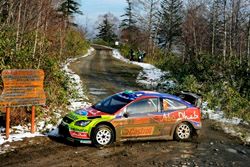 However, with Citroen pilot Loeb already planning to drive with the title in mind rather than gun for his sixth win of the campaign when the rally gets underway with two passes through the Sapporo Dome's superspecial stage on Thursday evening (September 9), Ford's Mikko Hirvonen will be a firm favourite to bag his ninth victory at world championship level using Pirelli tyres, which are supplied as standard to the WRC under a three-year agreement with motorsport's world governing body, the FIA. "I want to finish the season as well as I can so for sure I will try everything to win Rally Japan," said the 30-year-old from Finland. "The world championship title is not possible anymore but with four rallies to go there are two events where I really think I can challenge for the victory, starting with Japan. While it is over for me for the drivers' title, Ford can still win the manufacturers' title and to do that getting wins is vitally important." Hirvonen has triumphed on the WRC's last two visits to Japan, taking victory in 2007 and 2008. "It's a rally I really like," said Hirvonen. "It's similar to Finland, Great Britain and Australia in that you have fast and flowing stages through forests. But it's so unique in other ways because of the culture and the incredible history. Rallying might not be known in the whole country but the fans that come to the event are so fanatical and enthusiastic. For drivers it makes it very enjoyable and gives you a good feeling." Rally Japan first joined the world championship in 2004 when Petter Solberg swept to victory in a Subaru Impreza WRC using Pirelli tyres. Marcus Gronholm, driving a Peugeot 307 WRC, made it two wins out of two for Pirelli the following season before Hirvonen added a third victory in 2008. Pirelli will supply its soft compound Scorpion gravel tyre to the 55 crews taking part in four-wheel drive machinery in Japan. The compound type is designed to provide increased grip in cooler temperatures and in damp conditions, which have been a factor on the event in the past. Priority 1 and 2 drivers will receive an allowance of 30 Scorpion tyres plus six for the pre-event shakedown, while other crews in four-wheel drive cars get 20 Scorpion tyres for the rally and five for shakedown. The tyres were transported by boat from Italy to Japan during the summer. "Rally Japan is not one of the most demanding on tyres because the surface is not abrasive like on some other gravel rallies," said Pirelli's senior WRC tyre engineer Matteo Braga. "Cold temperatures and rain are always a possibility in Japan and with rain you can get some mud and it's possible some ruts can form. There can also be a problem of rocks being pulled onto the road for the second pass, which creates a risk of tyre damage because wheel rims can get broken, but it is not a big risk." While the stages on Friday and Saturday will be familiar to the bulk of the competitors, Sunday's gravel stages are all new. To add to the challenge, there is no midday service on day three of the rally, meaning competitors will have to adopt a degree of caution through the six forest stages before they return to Sapporo for the final two runs through the Sapporo Dome superspecial. Rally Japan is round seven of the of the Production Car World Rally Championship, for two-litre turbocharged Group N cars, and round eight of the Super 2000 World Rally Championship, which uses normally aspirated two-litre cars. Pirelli will supply its soft compound Scorpion tyres to both support championships, thereby underlining the performance and efficiency of the Italian rubber on a wide range of machinery. Although Rally Japan is not part of the Pirelli Star Driver programme's six-event schedule, Hayden Paddon, one of the training scheme's five young talents, will be competing in Japan as part of his individual PWRC effort. Rather than using his familiar Pirelli-liveried Mitsubishi Lancer Evolution X, Paddon will switch to his privately-run Lancer Evolution IX for his first appearance on the event. Rally Japan is one of the shortest events on the WRC schedule with a competitive distance of 303.54 kilometres over 26 special stages. Action gets underway at 1840hrs local time on Thursday September 9 with the ceremonial finish taking place at the Tsukisamu Dome in Sapporo at 1500hrs on Sunday September 12. Pirelli's Rally Japan in numbers 3: Pirelli victories on Rally Japan 36: number of Scorpion soft compound tyres available for use by P1 and P2 drivers 25: number of Scorpion soft compound tyres available for use by all other 4WD crews 6: World titles won by Sebastien Loeb 2: Production Car world titles won by Japan's Toshi Arai 6852: number of islands making up the archipelago of Japan 127 million: Japan's population 540,000: number of fans who attended Rally Japan in 2008 43,000: capacity of the Sapporo Dome, venue of the rally's superspecial stage