Although there is some debate about its exact meaning, the Finnish word 'sisu' loosely translates into English as 'having guts'. On the flat-out straights and blind crests of Rally Finland, drivers will need plenty of 'sisu' if they are to stand a chance of winning one of the World Rally Championship's most iconic events. 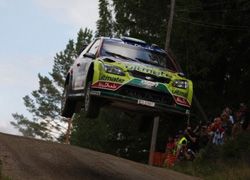 Retired two-time world champion Marcus Gronholm, one of eight different drivers to have won in Finland using Pirelli tyres, said: "To tackle Rally Finland you need courage but you need to know where the road is fast and where it is fastest. The rally is a series of twists, corners and jumps. The pacenotes have to be perfect because they tell you where to place the car on the road before taking off flat-out over a blind crest. You have to have maximum trust and faith in your co-driver." The challenge of competing on Rally Finland is not lost on 2007 Formula One world champion Kimi Raikkonen either. The Citroen Junior Team driver will be tackling the event for a second time and spent two days this week testing close to Jyvaskyla, where the rally will be based from July 29-31. "Rally Finland is all about having good pacenotes, an accurate set-up and everything being right with the car, including the tyres," said Raikkonen. "We used a variety of roads during the test so we experienced all the different types of road we'll have on the rally because they're not always smooth and can be bumpy in places. I never had a home Grand Prix when I was in Formula One so it is nice to have a home rally now I am in the WRC." Raikkonen used the test to sample the Pirelli Scorpion soft compound tyre, which will be provided to all crews in four-wheel drive machinery under Pirelli's three-year agreement with the FIA, motorsport's world governing body, as the official tyre supplier to the WRC. Matteo Braga, Pirelli's senior WRC tyre engineer, explained why the soft compound Pirelli Scorpion tyre has been chosen for this event: "The gravel in Finland is compact but it's also soft and smooth and not like the hard and abrasive gravel we found in Turkey and Portugal for example, so the soft compound tyre is the best option for this rally. Although it is usually warm and sunny in Finland, it is a tradition that there is some rain and the soft compound tyre works very well in these conditions. We have seen in the last two years the tyre was very good in Finland and we have no worries at all that we'll enjoy good performance and good durability on this event." Raikkonen is not the only star name in action on Rally Finland's 60th anniversary event. Juha Kankkunen, who won the WRC crown on four occasions and secured Pirelli's 10th victory in Finland when he triumphed on the event in 1999, will be coming out of retirement to drive a Pirelli-shod Ford Focus RS WRC 08, run by the British M-Sport team. "It's going to be great to drive again," said the 51-year-old Kankkunen. "I haven't spent much time in the latest generation World Rally Cars but knowing they'll disappear from the WRC after this season this is a fantastic opportunity to enjoy one. The target is a place in the top 10 and to do battle with Kimi Raikkonen." Rally Finland is the third event of the season for the Pirelli Star Driver programme, a joint initiative between Pirelli and the FIA. It gives the opportunity for five promising young talents, Nick Georgiou, Peter Horsey, Hayden Paddon, Alex Raschi and Ott Tanak, to contest six rounds of the World Rally Championship in identical Pirelli-backed Mitsubishi Lancer Evolution Xs. "I did the event last season and the roads are really fast and quite similar to those I know from back home in Estonia," said Tanak. "I have learned so much already in the Pirelli Star Driver programme this year so I have to make the finish to learn more." As well as counting as round eight of the main WRC, Rally Finland is also round five of the Production Car World Rally Championship, for two-litre turbocharged Group N cars, and round six of the Super 2000 World Rally Championship, which uses normally aspirated two-litre cars. Pirelli supplies its soft compound Scorpion tyres to both support championships underlining the performance and efficiency of the Italian rubber on a wide range of machinery. Rally Finland breaks with tradition this year by finishing on a Saturday night rather than Sunday afternoon. It has resulted in a more compact format with 19 stages, covering 310 competitive kilometres, effectively being squeezed into two days of high-speed competition. Pirelli's Rally Finland victories 1975: Hannu Mikkola/Asto Aho (Toyota Corolla) 1976: Markku Alen/Ilkka Kivimaki (Fiat 131 Abarth) 1978: Markku Alen/Ilkka Kivimaki (Fiat 131 Abarth) 1979: Markku Alen/Ilkka Kivimaki (Fiat 131 Abarth) 1980: Markku Alen/Ilkka Kivimaki (Fiat 131 Abarth) 1981: Ari Vatanen/David Richards (Ford Escort RS1800) 1982: Hannu Mikkola/Arne Hertz (Audi Quattro) 1987: Markku Alen/Ilkka Kivimaki (Lancia Delta HF 4WD) 1990: Carlos Sainz/Luis Moya (Toyota Celica GT-Four) 1999: Juha Kankkunen/Juha Repo (Subaru Impreza WRC) 2005: Marcus Gronholm/Timo Rautiainen (Peugeot 307 WRC) 2008: Sebastien Loeb/Daniel Elena (Citroen C4 WRC) 2009: Mikko Hirvonen/Jarmo Lehtinen (Ford Focus RS WRC 09)