The second round of the Lamborghini Blancpain Super Trofeo will get underway at Silverstone (Great Britain) from 4-5 June with Pirelli the sole supplier to the series. Starting from this round, the Italian tyre manufacturer will provide this highly-competitive championship with a new version of its P Zero slick tyre, specifically designed for the Gallardo Super Trofeo car. 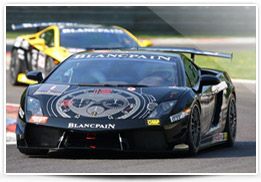 Pirelli has been the exclusive supplier to the Lamborghini Blancpain Super Trofeo championship since it was launched in 2009. This year’s calendar comprises six rounds, taking place on some of the most iconic European circuits where professional along with gentlemen drivers will compete in their Pirelli-equipped Lamborghini Gallardo LP 560-4s. The opening round of the third season of the Lamborghini one-make championship took place in Monza from 16-17 April. Pirelli successfully equipped a full grid of 26 drivers competing on the legendary Italian circuit at the wheel of their highly competitive Super Trofeo cars. Silverstone will mark the debut of the new slick tyre, specifically designed for the Gallardo Super Trofeo car. While the dimensions at the rear will be the same as those of last year’s tyre (305/660-18), the front tyre will have a different size: 275/645-18. However, the main improvement concerns the tread compound: the new tyre is in fact the latest evolution of the famous Pirelli P Zero family designed to provide more grip to ensure consistent lap times and higher levels of performance. Pirelli’s Motorsport Director Paul Hembery commented: “Besides being a highly competitive series, the Lamborghini Blancpain Super Trofeo is one of the fastest one-make championships in the world. When we started supplying the series in 2009 we developed a tyre that performed extremely well, with excellent road-holding on a dry and wet track. Thanks to our P Zero tyres we have enjoyed two years of spectacular competition. This year we have improved the tread compound of the slick tyre, which will be seen on track for the first time at Silverstone in June. Thanks to this significantly improved version, I’m sure that the Lamborghini races will be even more fast and furious this year!” Pirelli enjoys a well-established partnership with Lamborghini: a technological collaboration that is not just limited to the development of racing tyres, but extends to road products specifically designed for the Lamborghini cars. Just like the Super Trofeo cars, the new Lamborghini super sports car – the Aventador LP 700-4, which had its first international launch at the Vallelunga track near Rome at the end of April – will be equipped with Pirelli P Zero tyres: a tyre specifically developed and designed for the next generation of high-performance vehicles. For further information please contact Laura Bartoli on +44 7500 877 304 or laura@mediatica.co.uk