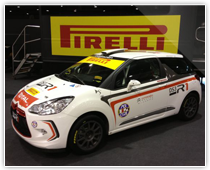 Following the success of the FIA WRC Academy, Pirelli continues in its role of talent scout, joining a new scheme for young rally drivers. The debut of the Citroën DS3 R1 Pirelli Rally Academy in Italy sees Pirelli joining forces with the French car manufacturer and ACI CSAI for five road races of the Italian Rally Championship in the new Citroën DS3 R1. The first race is the legendary Mille Miglia in April, followed by the Lanterna, Friuli and Sanremo rallies and finally the marvellous Targa Florio in Sicily. Entry is restricted to drivers aged under 25 who have until 25th February 2013 to register at a cost of €45,000 which includes vehicle hire, Pirelli tyres, fuel, comprehensive race insurance, personal mechanic, catering, logistics and technical/sporting services. The winner’s prize is a season in the 2014 Italian Rally Championship Racing as Citroën Racing factory driver in the DS3 R3.