Pirelli takes its Driver brand to Inter’s away kit 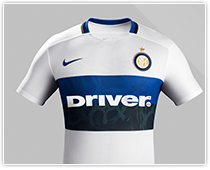 The logo of Driver, Pirelli’s specialised dealer network, will appear on Inter’s away kit for the 2015/2016 season. Pirelli’s traditional logo will still appear on the Milan team’s home shirt. The Driver network presently consists of around 400 Pirelli dealerships and it has major coverage throughout Italy. Its dealers are able to offer complete services to customers, from supplying and fitting the most suitable tyres, to mechanical repairs and maintenance. The Driver logo on Inter’s away kit is part of Pirelli’s communication strategy supporting the network expansion. Behind the inspiration for the new Driver shirt are two of the most successful seasons of Inter, 1964-1965 and 2009-2010. The shirt has a white background with Inter’s famous black and blue stripes across the chest, and highlights in traditional colours on the collar and down the sides. The Driver logo on the shirts of Roberto Mancini’s team adds another chapter to the history of the 20 year old partnership between Inter and Pirelli, which dates back to 1995/1996 and is the longest-standing partnership in the history of world football.

Pirelli takes its Driver brand to Inter’s away kit
Newsroom