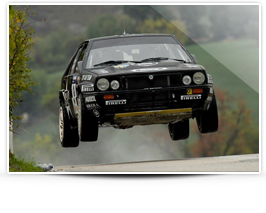 Pirelli is once again the exclusive tyre supplier of Rally Legend this weekend: a festival of rallying that will unite 15 world rally champions and their most famous cars – as well as many other stars of the sport.

This unique event, from October 19-22, is based in San Marino and incorporates a competitive element as well as several displays and parades: including a special celebration of the life and cars of Colin McRae, world champion with Pirelli in 1995.

Rally Legend regularly attracts some of the biggest names in the sport, with the star drivers present this year including Walter Rohrl, Ari Vatanen, Hannu Mikkola, Stig Blomqvist, Timo Salonen, Juha Kankkunen, Miki Biasion, Didier Auriol, Tommi Makinen, Marcus Gronholm, Petter Solberg, Sebastien Loeb and Sebastien Ogier, as well as Markku Alen and Italian legend Sandro Munari. Between them, the 15 world champions present have clinched a remarkable 34 titles – and they will all be driving the cars in which they won their championships as part of an unforgettable parade on Sunday.

Pirelli will exclusively supply the P Zero RK and Cinturato RW for modern machinery as well as the P7 Corsa Classic for historic rally cars. The Italian firm is additionally awarding the ‘Pirelli Jump’ trophy again for the best jump, selected by a panel of experts.

Pirelli’s rally activity manager Terenzio Testoni said: “It’s a privilege to be an official sponsor at this unique Italian event where such a large number of world rally champions and their amazing cars are gathered. Many of them won their titles on Pirelli tyres: from Walter Rohrl in the Fiat 131 in 1981, to Sebastien Loeb in the Citroen C4 WRC in 2010. We’ll also be exclusively supplying tyres for all the competing cars, which range from the iconic Audi Sport Quattro to the Zastava 850. This highlights not only the versatility of Pirelli’s products but also our enduring commitment to rallying over the years, which continues now into the future with the next generation of stars.”

Rally Legend officially opens on Thursday October 19, while shakedown on the morning of Friday October 20 is the first opportunity to watch the cars in action, followed by the opening night stages in the evening. The event continues on Saturday and Sunday with a ‘walkabout’ each morning at San Marino Stadium so that fans can get close to the cars, followed by stages in the afternoon. On Sunday, the McRae tribute and champions’ parade also takes place: with Pirelli taking centre stage in this piece of rallying history.