Pirelli to supply the BRDC F4 Championship in the UK 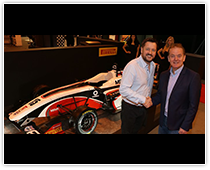 Pirelli is the new sole tyre supplier for the BRDC Formula 4 Championship. The Italian company has entered into an agreement with BRDC F4 creator and promoter MotorSport Vision to supply all MSV F4-013 cars with P Zero™ tyres from 2015. The new tyres have been developed specifically for junior single seater racing by Pirelli engineers in Milan and incorporate learning from Pirelli’s participation in Formula One and feeder categories GP2 and GP3. The tyres will be distributed from Pirelli’s logistics hub in Didcot, Oxfordshire – regarded as a “centre of excellence” in motorsport. The BRDC F4 is based in the United Kingdom and is the brainchild of ex-grand prix driver Jonathan Palmer, whose son Jolyon won the 2014 GP2 title using Pirelli tyres. The 2015 BRDC F4 season comprises 24 races over eight weekends, on a variety of famous British circuits, such as Silverstone, Snetterton, Donington and Brands Hatch. The championship is designed as a low-cost entrance to car racing, with the maximum budget being of no more than £120,000 per racing season. The value of BRDC F4 as a showcase for young and talented and as an introduction to F1 was reaffirmed, when 2014 BRDC F4 Champion George Russell won the McLaren BRDC Autosport Award, which carries a prize of £100,000 and a test in a McLaren Formula One car. Pirelli’s Motorsport director Paul Hembery commented: “We are delighted to be involved in this innovative formula, which offers drivers the opportunity to take their first steps in motorsport with a perfect compromise between costs and performance. This latest initiative underlines our company’s philosophy of providing young drivers with opportunities to progress within motorsport, all the way up to the highest levels of the competition.”

Pirelli to supply the BRDC F4 Championship in the UK
Newsroom