Pirelli top partner of the Match for Peace 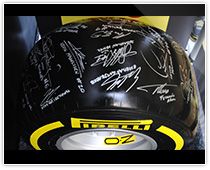 Pirelli confirmed its commitment to promoting sport as a powerful means of cultural and generational dialog and integration through its support of the Inter-religious Match for Peace and development of related projects.  The players of the two teams, protagonists on the field in Rome on the 1st of September, and the drivers of all FORMULA1 teams, of which Pirelli is sole tyre supplier since 2010, signed a PZero™ Grand Prix tyre. The tyre was then auctioned on the PUPI Foundation Ebay channel and the proceeds were donated to the Scholas Occurrentes Foundation and to the PUPI Foundation. The #P4Peace social media campaign started instead within Pirelli itself with the selfies of the company’s employees from around the world, which by mid-August had been viewed by over 2.5 million people and supported by more than 70,000 fans, including sporting champions and fashion, art and entertainment celebrities.  The selfies of Pirelli employees have also been made into a video — which was shown at the Olimpico stadium on the evening of the match — underlining the values of multiculturalism and integration, which have always distinguished Pirelli’s entrepreneurial culture. For the event, Pirelli and P Zero also created a limited edition t-shirt featuring the word “Peace” in the world’s major languages. The 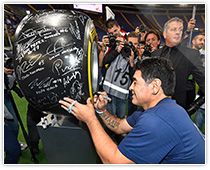 t-shirts could be purchased at the stadium on the day of the match and are now available at Pirelli’s Corso Venezia flagship store and on the online stores of Pirelli P Zero (www.pirellipzero.com) and of the PUPI Foundation. All the proceeds will go to the Scholas Occurentes Foundation and to the PUPI Foundation.

Pirelli top partner of the Match for Peace
Newsroom