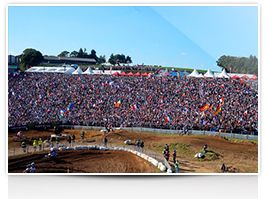 One week after the end of the FIM Motocross World Championship, the sixty-ninth edition of the Monster Energy FIM Motocross of Nations was held at Ernée, France. More than eighty thousand fans filled the amphitheatre setting to follow the competition for national teams that closes the season. The French circuit, situated in the region of the Pays de Loire, is formed from hard-pack ground, upon which Pirelli could show the quality of SCORPION™ MX32™ tyres chosen by 50% of the 111 riders that entered the race. After three hard-fought motos overall victory went to France who defeated Team USA by two points to repeat their 2014 success. Another fantastic performance was unveiled by Romain Febvre, a rookie at the Nations. The freshly crowned MXGP champion dominated proceedings winning both races and the overall classification of the Open class, perfectly assisted by SCORPION™ MX32™ 80 / 100-21 front and 110 / 90-19 rear. Justin Barcia claimed the first heat of the day and owned the MXGP class using the front prototype tyre in 80 / 100-21 sizes, which was widely used during the World Championship and the new SCORPION™  MX32™ PRO 120 / 80-19 rear tyre, the latest arrival to the Pirelli range and developed in the AMA American Championship. It was an excellent day for Team Belgium represented by Pirelli riders Jeremy Van Horebeek and Ken DeDycker, who finished the event on the third step of the podium. A good third place overall was had by Jeremy Seewer in the MX2 class. Worth noting is the amazing result of New Zealander Ben Townley who, after retiring at the end of 2013 and coming back to the international stage, was able to finish in fourth place in the MXGP division. 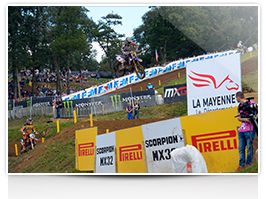 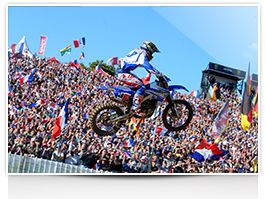 The Monster Energy FIM Motocross of Nations finished the 2015 racing season. A term that, thanks to the incredible quality of its tyres, confirmed Pirelli on top in each class and led to a grand total of sixty-four titles celebrated in the FIM Motocross World Championship. 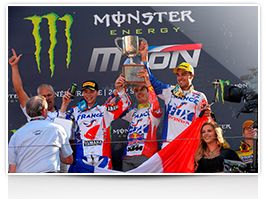 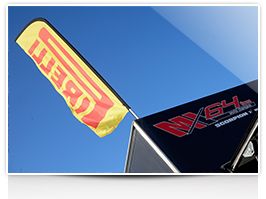