Max Nagl and Dylan Ferrandis win in Loket, Tim Gajser is always leading in MXGP while Jeffrey Herlings keeps the Red Plate of the MX2 despite was out for injurie After a four-week break, the Loket "Serpentine" greeted the riders for the Grand Prix of the Czech Republic, the thirteenth round of the FIM Motocross World Championship season. The Czech track is characterized by a hard-stony soil and very slippery, even due of some summer showers, and has become very difficult to manage. The obvious choice for Pirelli riders for the front tyres has been the excellent SCORPION™ MX32™ MID SOFT 80/100-21, either for the small 250 and either with more powerful 450. 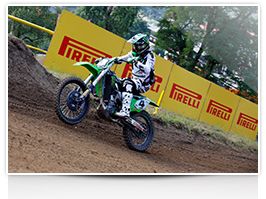 Max Nagl grabbed the top spot in the MXGP class winning both races. The German did not make any mistakes in a very insidious track. Second place belonged to Tim Gajser who always finished behind Nagl and retained the Red Plate in the championship by bringing his lead to 109 points. Excellent performance for Romain Febvre that, returning after the injurie he got in England, has grabbed the third place while his teammate Jeremy Van Horebeek ended fifth level on points with fourth-placed. In MXGP the choice of the rear tyre was dictated by the need to have a better traction and Pirelli SCORPION™ MX32™ MID SOFT 120/90-19 proved to be the winning one. Antonio Cairoli was the only rider who has opted for the 110/90-19 size after his return aboard the small 350. 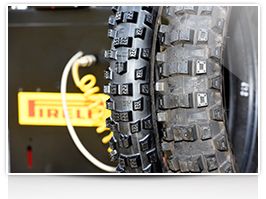