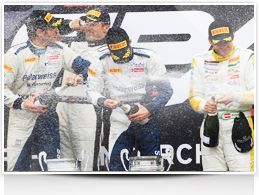 The jewel in the crown of the Blancpain Endurance Series is the Spa 24 Hours, held at the legendary Spa-Francorchamps circuit in Belgium last weekend. The Spa Francorchamps circuit is an epic track, with the longest lap of the year, huge changes in elevation, plenty of time spent at full throttle and variable weather conditions. It is a real driver’s track, renowned as a true test of bravery and commitment. And the demands of the mighty 7.004-kilometre circuit through the Ardennes are just as important on the tyres as they are on the teams and drivers. As usual, Pirelli supplied the Blancpain Endurance Racing crews with its P Zero tyres that have been used throughout the year: one slick tyre and one wet tyre. Endurance racing features a wide variety of different car configurations, ranging from front to rear engines, but despite this radically diverse set of vehicle dynamics, the Italian tyres guarantee optimal performance for every competitor – as was evident at the Spa 24 Hours, where Mercedes battled Porsche for the lead. The Blancpain Endurance Series is a five-round endurance racing championship that encompasses a wide variety of teams representing different manufacturers. The cars eligible are race versions of road-going supercars. As well as supporting the series, Pirelli is also the proud sponsor of an award to the top-placed team contesting both series, underlining the Italian firm’s commitment to world-class endurance racing. With the help of Pirelli’s tyres, Mercedes took its first win in the Belgian endurance classic since 1964, the HTP crew of touring car legend Bernd Schneider and race rookies Maximilian Buhk and Maximilian Gotz winning by one lap from the Manthey Racing Porsche 911 GT3-R of Marc Lieb, Richard Lietz and Patrick Pilet. Schneider said afterwards: “I didn't expect to do a 24-hour qualifying session. We were pushing all night and only in the last couple of hours were we able to be a bit more gentle on the car.” With some rain falling during the night at Spa, the teams used Pirelli’s complete range of rain and slick tyres, all of which performed effectively and reliably to lead to a thrilling showdown on one of the most legendary circuits in the world. The tyres undergo huge compressions at Spa through corners such as Eau Rouge and also have to cope with some of the highest lateral energy loads of the year. Despite these massive demands, the slicks and wets were entirely reliable throughout the 24 hours. Pirelli’s senior tyre engineer Matteo Braga commented: “We witnessed a truly epic race this year, during which the teams were able to appreciate the qualities of all our tyres, which performed faultlessly. Our fitting team worked exceptionally hard over the 24 hours, especially at the beginning of the race when the teams were changing the tyres more frequently. Even though the Spa 24 Hours is by a long way the most demanding race of the championship, we supplied exactly the same tyres as we did for the rest of the year, with no specific modifications. Once more they proved to be entirely reliable, striking the perfect compromise between performance and durability and enabling the winning Mercedes crew to score a well-deserved victory. Even though most of the teams could have got two stints out of each tyre, many of the teams didn’t choose to because the fight was so close. These tyres share the same characteristics of the P Zero road car tyres, which equip many of the supercars represented on the Blancpain Endurance Series.” The next and final round of the Blancpain Endurance Series takes place at another classic venue: the Nurburgring in Germany from 21-22 September.

For further information on Pirelli, please contact Anthony Peacock on anthony@mediaticaworld.com or +44 7765 896 930