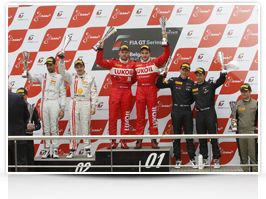 The latest range of endurance racing tyres from Pirelli performed perfectly at the second round of the FIA GT Series which was held at Zolder over the weekend and resulted in one of the closest finishes in the championship’s history. The race marked only the second time that crews competing in this year’s premier endurance racing series have used the new-look P Zero tyres – which feature new sizes for front and mid-engined cars - but the racing proved nail-bitingly close with Lamborghini taking the round two victory by less than half a second. Pirelli has highlighted its commitment to endurance racing this year by agreeing terms to supply its P Zero racing tyres to both the FIA GT Series and the Blancpain Endurance Series for a minimum of three years. Using the latest production processes modelled on its involvement in Formula One, Pirelli has produced tyres that are tailor-made to the various supercars that compete in the demanding world of GT racing. The Lamborghini crew of Peter Kox and Stefan Rosina narrowly pipped Stephane Ortelli and Laurens Vathoor’s Audi R8 LMS to the post during Saturday’s race, clinching the round two victory by a mere 0.448 seconds. Completing the podium line-up was the Audi R8 LMS ultra of Edward Sandstrom and Frank Stippler. Nine-time world rally champion Sebastien Loeb played his part in helping the Sebastien Loeb Racing McLaren MP4-12C team of Andreas Zuber and Mike Parisy take fourth overall – although Loeb himself suffered a weekend of mixed fortunes following a technical problem and a clash with another competitor. 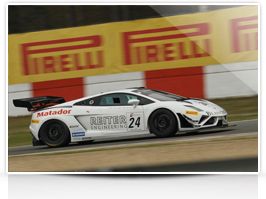 Pirelli’s senior engineer Matteo Braga, who was trackside to advise the teams competing at Zolder, said: “The action in Zolder was nothing short of spectacular. To witness such a close finish, which was decided on the performances on the race’s very last lap, is testament to how much pressure our Pirelli P Zero racing tyres can withstand. Our tyres were pushed to the limit during the race’s closing lap but they allowed the drivers to deliver a fantastic battle, which everybody was able to enjoy. This is extremely encouraging for the championship and underlines why Pirelli P Zero tyres are used as original equipment on some of the most powerful performance driven cars in the world.” The teams will now have a break until the next round of the 2013 FIA GT Series which will take place at Zandvoort from 6-7 July. For further information on Pirelli, please contact Anthony Peacock onanthony@mediaticaworld.com or +44 7765 896 930.