Pirelli tyres successfully complete the first round of 2011 GP2 Asia

Having made their debut in Friday's feature race, Pirelli's new medium compound PZero tyres once again performed faultlessly throughout the second race of the GP2 Asia weekend in Abu Dhabi. 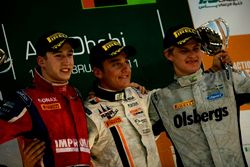 The same dry and cool weather that characterised Friday's action formed the backdrop to the sprint race on Saturday afternoon. Pirelli tyres completed over 26 laps of the short Yas Marina track configuration, with Stefano Coletti (Trident Racing) leading from pole, followed by Josef Kral (Arden International) in second and Marcus Ericsson (iSport International) in third. With no pit stops allowed, the drivers' ability to manage their rubber throughout the race proved to be essential, especially in the hard braking areas. Pirelli's racing manager Mario Isola commented: "The PZero medium slicks enjoyed a great start at Abu Dhabi over the weekend. As both races got underway in the late afternoon, the tyres had to cope with ambient and track temperatures that went from warm to cool in a very short time. Although the drivers were competing with new cars on new tyres, they were all very good at managing their rubber, avoiding problems of overheating or excessive wear. Nonetheless, the drivers will need to properly address these issues when they compete on a much hotter track in Bahrain next weekend, for round two of the GP2 Asia Series. Although the new medium compound is on purpose slightly less durable compared to last year's, it showed good results in terms of wear rates, ensuring plenty speed and grip during both races. We'd particularly like to congratulate Jules Bianchi, who drove a fantastic race with some great manoeuvres." The next round of the GP2 Asia Series will take place at the Bahrain International Circuit in Manama, from 17-19 February. As the curtain falls on Abu Dhabi, Pirelli's tyres head towards their next destination where the arid desert weather is set to play a decisive role once again.