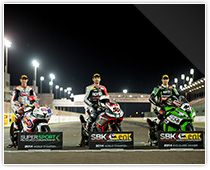 On the Losail International Circuit the eni FIM World Superbike Championship came to a close, awarding the title of World Champion to Sylvain Guintoli and the Manufacturer Championship title to Aprilia. Starting with the 2004 season and now in its 11th year, the technical partnership between Pirelli and the eni FIM World Superbike Championship teams and riders can now boast being the longest ever control tyre supply in the history of International motorsports. Pirelli was able to achieve this result thanks to the constant efforts towards product innovation and development.  Pirelli tyres in the racing sector have contributed more than 1 million race kilometres, often running at extreme temperatures and conditions. In 2013, Pirelli’s  philosophy, which has always characterised the tyre manufacturer’s commitment and strategy in the FIM World Superbike Championship, meant that Pirelli  used tyres which were not prototypes but standard tyres and therefore available on the 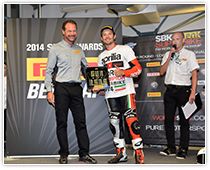 market.  In a revolutionary move, Pirelli withdrew the 16.5 inch DIABLO™ Superbike tyres in favour of the new 17” tyres; a more commonly used size among bikers. The slogan “We sell what we race, We race what we sell” has by now become a trademark for the brand which demonstrates just how the experience and technology acquired in the racing world are made available to all bikers. This also explains the great effort which is dedicated to the development of racing tyres; it is focused on performance and long life rather than just completing flying laps. Pirelli will be the eni FIM Superbike World Championship's exclusive tyre supplier up to and including 2018.