Pirelli wins every class on the Rally il Ciocco

Peugeot Italia driver Paolo Andreucci has taken his sixth victory on his home event, the all-asphalt Rally il Ciocco, leading home all the Pirelli-equipped class winners on the first round of the Italian Championship. 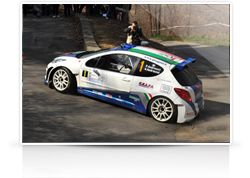 Andreucci, who is also Pirelli’s official test driver, used Pirelli’s latest RX7 tyres, which were also available to privateers on the event. Alessandro Perico, driving another Peugeot 207 S2000, used them to finish third on the event – making it two Pirelli-equipped cars on the podium. Matteo Gamba, driving yet another Peugeot on Pirelli tyres, finished fourth. The RX7 tyre performed perfectly under a very wide range of road conditions and temperatures on the Ciocco event, held in the mountainous Garfagnana region of Tuscany. The opening day – where Andreucci won every stage – was characterised by dry but slippery asphalt, whereas day two was held on a more abrasive surface in mixed conditions: damp with some wet patches. Temperatures ranged from five to 15 degrees centigrade, underlining the versatility of the Pirelli rubber. The Italian firm also brought its new RX5B, in case temperatures exceeded 20 degrees and the RX9 softer slick for temperatures below 10 degrees. Andreucci, co-driven as always by Anna Andreussi, won nine of the 13 stages, with Perico winning the final stage of the rally for Pirelli as well. Not only that but Pirelli won all the classes: two-wheel drive with Eddie Sciessere (Renault Clio S1600, fifth overall), Junior with Simone Campedelli (Citroen DS3 R3T, sixth overall), Production with Ivan Ferrarotti (Renault Megane, seventh overall), and Group R (Andrea Nucita, eighth overall). Andreucci, who won by nearly half a minute, said: “I’m very happy with this latest victory on my home rally and with the performance of the Pirelli tyres, which gave me confidence in a very wide variety of conditions, which is always a typical characteristic of this event. The RX7 tyre was what we used to build our victory: we already had a good test before the rally and this prepared us well. The stability and the driving precision of this tyre was a real advantage, even when the conditions were damp. However, we are not taking anything for granted: last year we had a very good season but the competition is always strong and we need to keep pushing throughout the year.” The Rally il Ciocco was also the opening round of the Twingo R2 Trofeo Gordini, which is exclusively supplied by Pirelli, with Andrea Carella emerging as the first winner. Pirelli’s motorsport director Paul Hembery commented: “Congratulations to Paolo and all of Pirelli’s other class winners on the Ciocco. The Italian Rally Championship is extremely important to all of us here at Pirelli: not only are we competing on home territory with an important winning record to defend, but it showcases perfectly the capabilities of our competition tyres on normal roads. The lessons we learn from competition all filter down to our premium road car products, and rallying provides us with some of the most direct technology transfer.” The next round of the Italian Rally Championship is one of the most famous names in the history of the sport: the Rally Mille Miglia, based in Brescia from April 19-21. For more information about Pirelli, please contact Anthony Peacock on +44 (0)7765 896 930 or anthony@mediatica.co.uk

Pirelli wins every class on the Rally il Ciocco
Newsroom