Pirelli wins its 68th World Title with Cairoli and Jonass 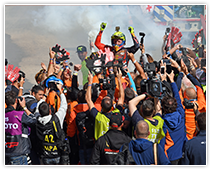 The Grand Prix of the Pays de Montbeliard closed another triumphant motocross season for Pirelli. Thanks to the performance of its SCORPION™ MX tyre line Pirelli has achieved its 68th World Title, confirming itself as the most successful tyre brand in the history of motocross. After Antonio Cairoli's MXGP title, the famous tyre brand completed the double in 2017 with Pauls Jonass' MX2 crown. Cairoli, riding his Pirelli-shod KTM, won the FIM Motocross World Championship for the ninth time. The Italian champion closed the title speech in the MXGP class one round before the end of the Championship in the TT Circuit of Assen. After two seasons marked by some injuries, Cairoli centered on the ninth title of his incredible career that has seen him at the top of world rankings for fifteen years. The 31 year old wrapped up the title before the end of the season, after showing amazing consistency throughout the 2017 championship – including six GP wins and finishing runner-up in a further four. For much of the season, Cairoli has used Pirelli’s Scorpion MX32 Mid Soft on both front and rear, by far the most popular tyre choice amongst all riders using the Italian brand in MXGP and MX2. The final round of the 2017 FIM Motocross World Championship was another success for Pirelli. Red Bull KTM Factory Racing’s Pauls Jonass is the new FIM Motocross World Champion in the MX2 class. He takes the world title for the first time in his career. On the tough and technical course of Villars sous Ecot, a hard-pack track that became slippery due to frequent rain showers, the new development rear SCORPION™ MX Softdemonstrated a range of usage beyond expectations and proved to be competitive even in extreme muddy conditions. Jonass captured 7 Pole Positions, 14 heat wins and 6 GP wins this season as the first one was at first round of the Championship, in Losail, Qatar and the last came at the MXGP of Czech Republic.