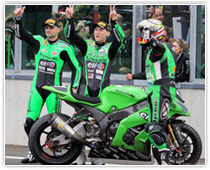 In mid-April at the Nevers Magny-Cours track in France, the Kawasaki SRC Team on ZX10R machines fitted with Pirelli Diablo Superbike, Diablo Wet and Diablo Rain tyres won the 76th running of the Bol d’Or. After finishing runner up in 2011, Pirelli mounted the winner’s rostrum for the first time in its history. And the Italian manufacturer has achieved this latest prestigious victory in the Endurance World Championship with the same team and riders (Julien Da Costa, Grégory Leblanc and Olivier Four) with whom it has won the last two runnings of the 24h of Le Mans in 2010 and 2011. 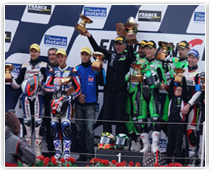 The relay legs utilised Diablo Superbike, Diablo Wet and Diablo Rain tyres. The grip and mileage of the Pirelli tyres allowed long distances to be travelled on each leg, whilst ensuring the riders enjoyed unwavering performance throughout the race. The perfect balance between riders, bike and Pirelli Diablo tyres proved crucial in winning the Bol d’Or for the first time in front of the Suzuki GSXR (No. 1) from the Suzuki Endurance Racing Team (SERT) base and Yamaha R1 (No. 7) from the Monster - Yamaha Austria Racing Team (YART).