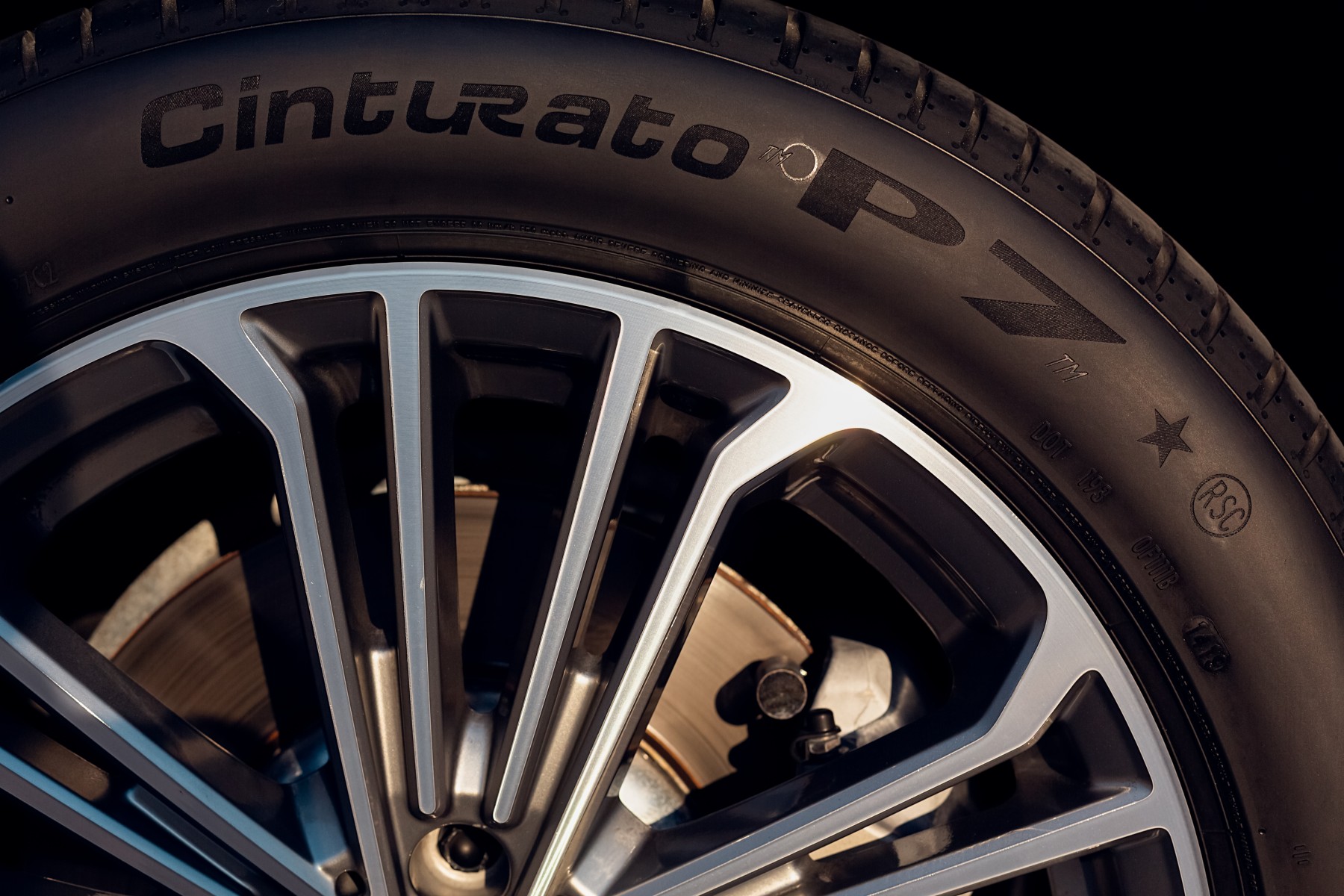 Milan, March 6, 2020 – The Pirelli Cinturato is 70 years old. It was born when mass mobility was just taking off, but now it’s ready to expand with the imminent debut of the latest Cinturato P7, which benefits from seven decades of continuous technical development. Cinturato is also the most versatile tyre in the Pirelli Velo range, and it’s additionally set to equip Pirelli’s Cycl-e Around e-bikes, a bike-sharing service conceived to promote sustainable mobility. But not only that: development of intelligent tyres connected to the 5G network continues apace, with the new Cinturato P7 getting ready for the future of mobility and smart cities.

The new generation of Cinturato P7 highlights the key priorities for everyday road users: safety and efficiency. Thanks to an intense research and development programme, Pirelli’s engineers have come up with a high-technology product that’s able to overcome many of compromises traditionally associated with tyres and reconcile seemingly conflicting requirements, such as performance in the wet and low rolling resistance. This is a direct result of the technology locked into the new Cinturato P7, benefitting both drivers and car manufacturers.

This new tyre for premium cars, as well as carrying over the dry-weather performance from its predecessor, improves the whole driving experience when it comes to wet handling and resistance to aquaplaning. Wet braking takes a step forward in particular, with up to four fewer metres needed to stop from 100kph. The innovations introduced by Pirelli’s engineers also improve acoustic comfort (courtesy of less road noise) and ride comfort, with the new tyre now able to absorb more bumps in the road. Overall tyre life increases by 6%, meaning that drivers can go longer before swapping tyres. Underlining the efficiency of the new Cinturato P7, rolling resistance goes down a class thanks to a reduction of 12%, improving fuel consumption by 4% (on the WLTP cycle) and reducing CO2 emissions.

The new P7 can benefit from Pirelli’s other specialities as well, such as Run Flat and Seal Inside, which allow motorists to keep driving even after a puncture. There will also be an Elect version, which identifies Pirelli tyres specially made for electric cars or plug-in hybrids.

CINTURATO: READY FOR THE 5G NETWORK TO ENHANCE SUSTAINABLE MOBILITY

The new Cinturato P7 will additionally be part of Pirelli’s ongoing Cyber research programme, with the Italian firm already having been the first to connect a tyre to the 5G network. This technology is currently being developed for future use in the smart cities that are just around the corner. Pirelli was the first global tyre firm to share information collected via intelligent tyres over the 5G network, capitalising on the tyre being the only part of the car to come into direct contact with the road, with the capability to warn of potentially dangerous situations such as aquaplaning. In the near future, the 5G telecommunications infrastructure will be able to collect all this information gathered by tyres and inform other vehicles of situations as they arise, directly improving road safety. All this elevates the tyre to an important communications tool that can ultimately benefit the entire transport ecosystem, actively contributing to future mobility and autonomous driving systems.

CINTURATO FOR PIRELLI CYCL-E AROUND

New forms of alternative mobility are springing up in cities all over the world, with the common aim of improving sustainability. In 2019, Pirelli launched its Cycl-e Around programme: an all-inclusive premium e-bike hire service (which are pedal bikes with electric assistance) on Pirelli tyres. The latest range of these e-bikes uses Pirelli Cinturato Gravel tyres, specially designed to cope with all sorts of weather and surface conditions both in and out of town. The Pirelli Cinturato Gravel tyre, launched at the end of 2019, responds to the increasing demand for more comfortable and adaptable bikes than the traditional racer, complete with the capacity for light off-road work. Pirelli created the new SpeedGRIP compound especially for the Cinturato Gravel tyre, which is designed to safely tackle every situation a cyclist is likely to find, both in the wet and the dry.

PIRELLI CINTURATO: A STORY OF SAFETY AND TECHNOLOGY THAT DATES FROM THE 1950s

Seventy years ago, Pirelli’s engineers tried out the first prototype of an innovative tyre that gave birth to an entire family. At the time, it wasn’t yet called Cinturato, but it was hiding a genuine industry revolution underneath the tread pattern. Throughout the history of tyre-making, there have been relatively few truly radical changes, yet one of them was definitely the introduction of radial tyres that Pirelli developed using textile and metal reinforcements. The “fabulous new tyre with its own safety belt inside” – as the Cinturato was described by Pirelli’s marketing department at the time – went on to equip the most important cars of its era. From the beginning, the ‘367’ tyre was chosen by manufacturers such as Lancia but the next evolution of this landmark tyre would introduce the Cinturato to the world’s most desirable cars. With the introduction of the Cinturato CA67, CN72 and CN73 covers, Pirelli invented the concept of the sporting tyre for the road – which was needed to provide as much grip as possible for epoch-defining supercars such as the Ferrari 250 GT and 400 Superamerica, Lamborghini 400GT and Miura, Maserati 4000 and 5000. The CN12 marked the beginning of low profile tyres, capable of delivering even more performance. The game moved on yet again with the introduction of the CN36, which was born for road cars but also made its mark on rallying. Using this experience, other evolutions of the Cinturato such as CN54 were subsequently created.

FROM THE FIRST CINTURATO P7 TO THE P ZERO

By the mid 1970s, the next big revolution in the Cinturato family had made its presence felt. Created for rallying in general and the Lancia Stratos in particular, the first Cinturato P7 contained ground-breaking innovations such as a zero-degree nylon belt and above all an ultra-low profile. The first cars to adopt it on the road were the Porsche 911 Carrera Turbo, Lamborghini Countach and De Tomaso Pantera. The P7 was swiftly followed by the P6: a tyre that was less sporty, but with a wider range of potential applications. Then there was the P5, created specifically for Jaguar, which had asked Pirelli for the quietest possible tyre with maximum ride comfort. In the 1980s, the P600 and P700 were born, the successors to the P6 and P7 respectively. These focussed on safety improvements, such as wet grip and cornering. By the time the 1990s came round, the P6000 and P7000 were on the market, improving safety and performance still further. In the meantime, Pirelli’s engineers had worked on yet another revolution, to equip the mighty Lancia S4 rally car. This beast needed bespoke tyres to cope with the brutal power it was able to generate , and so the P Zero was born. But that’s another story entirely…

THE P7 IS BORN AGAIN

In 2009, the Cinturato P7 name made a comeback, headlining on its ability to reduce fuel consumption and noxious emissions, its use of ecological materials, and improved handling and braking. The family grew with the introduction of Winter and All Season versions, which remain part of the range today and have racked up more than 400 homologations. This just goes to show how the Cinturato P7 has always been a favourite among carmakers, thanks also to its ability to follow the latest automotive trends. The Cinturato P7 has kept up with all the game-changing innovations introduced in recent years: advanced electronics, driver assistance systems, hybrid and electric cars. Today, the new Cinturato P7 builds on this heritage and launches with 60 homologations to its name already. More than ever, it showcases the two guiding principles that have shaped its development from the 1950s right up to now: safety and efficiency.