The opening two races of the GP2 double-header in Bahrain, which were dominated by DAMS driver Davide Valsecchi, came down to tyre management: particularly during Saturday’s feature race that as always included a compulsory pit stop during which at least two tyres must be changed. The drivers had a choice of using the Pirelli P Zero hard and P Zero medium tyres – but unlike Formula One they do not have to use both compounds when racing, as only one set of the softer tyres is provided for each weekend. 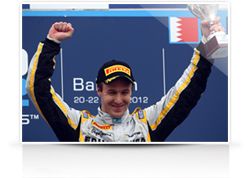 Italy’s Valsecchi qualified on pole for the second consecutive occasion at the hot and dusty Sakhir circuit, using the medium tyres. These provided him with plenty of grip despite the sand blown onto the surface from the surrounding desert. This problem is always worse at the start of each session, before the cars run and sweep off the excess dirt, so the drivers had their work cut out all weekend. Valsecchi used the medium tyres to begin the 30-lap race one on Saturday and then the hard tyres for the second stint, following an impressive stop from the DAMS mechanics. With 16 laps to go his 12-second lead was neutralised by the appearance of a safety car. At the re-start, he pushed hard enough to set the fastest lap, but Lotus GP’s James Calado – who was in second place on a similar strategy, having stopped five laps earlier – fell back as his tyres went off, allowing Luis Razia to claim the runner-up spot for Arden International ahead of Gutierrez. “From my point of view there was not so much degradation,” said Valsecchi afterwards. “We had a bit of degradation during the first stint and when we put the second set for the second stint it was fine. At the end, there was normal degradation but it was enough to stay on pace and pull away after the safety car.” Dutch driver Nigel Melker suffered a front tyre failure in race one, after the tyre was damaged due to contact with bodywork. During the second race, which was held on Sunday morning before the Grand Prix, the drivers are not allowed pit stops, so they all started on the hard compound tyre for the 23 laps, with the top eight from race one reversed on the starting grid. Valsecchi put in an astonishing performance, making up five seconds in the last seven laps to claim victory in the closing stages, having taken the lead on the very last lap when Gutierrez began to struggle with tyre wear. Having looked after his tyres at the start of the race, Valsecchi was able to go a second a lap faster than his rivals at the end. Nasr also got the most out of the hard tyres by claiming sixth following a pitlane start. Pirelli’s racing manager Mario Isola commented: “The decision to introduce an element of tyre choice into GP2 this year has already paid off, with drivers now able to use strategy to help them gain positions that they would not be able to normally. Valsecchi selected the perfect strategy and knew when to push as well as when to drive more conservatively, even though there wasn’t such a big difference in lap time between the hard and the medium tyre as many people expected here. Tom Dillman was another driver who was able to use race strategy to his advantage, converting 15th place on the grid in race one to sixth overall. During race two, the drivers had to manage degradation even more carefully, in order to get the best out of their tyres for the entire duration of the race, which was no easy task. Congratulations to Davide – his performance during the second race in particular showed that he has understood the tyres perfectly – and also to Felipe Nasr, who drove an exceptional race as well.” This year marks the longest ever GP2 season, with 12 rounds and 24 races. The following round of the Pirelli-equipped series takes place in Bahrain again next weekend. PLEASE SEE ATTACHED PDF DOCUMENT FOR GP2 PIT STOP SUMMARY *** Follow us on Twitter @ Pirelli_Media or Facebook on www.facebook.com/Pirelli For further information please contact Alexandra Schieren +33 607 03 69 03 alexandra.schieren@pirelli.com Anthony Peacock +44 7765 896 930 anthony@mediatica.co.uk ** Francescopaolo Tarallo +39 334 684 4307 francescopaolo.tarallo@pirelli.com (Head of Product and Motorsport Communications)