PIRELLI’S NEW CINTURATO P7 ARRIVES: THE TYRE WITH AN ‘INTELLIGENT’ COMPOUND THAT ADAPTS ITSELF TO TEMPERATURE AND DRIVING CONDITIONS

GREATER SAFETY, EFFICIENCY AND COMFORT: THANKS ALSO TO A COMMON DEVELOPMENT PROGRAMME TOGETHER WITH PREMIUM CAR MANUFACTURERS 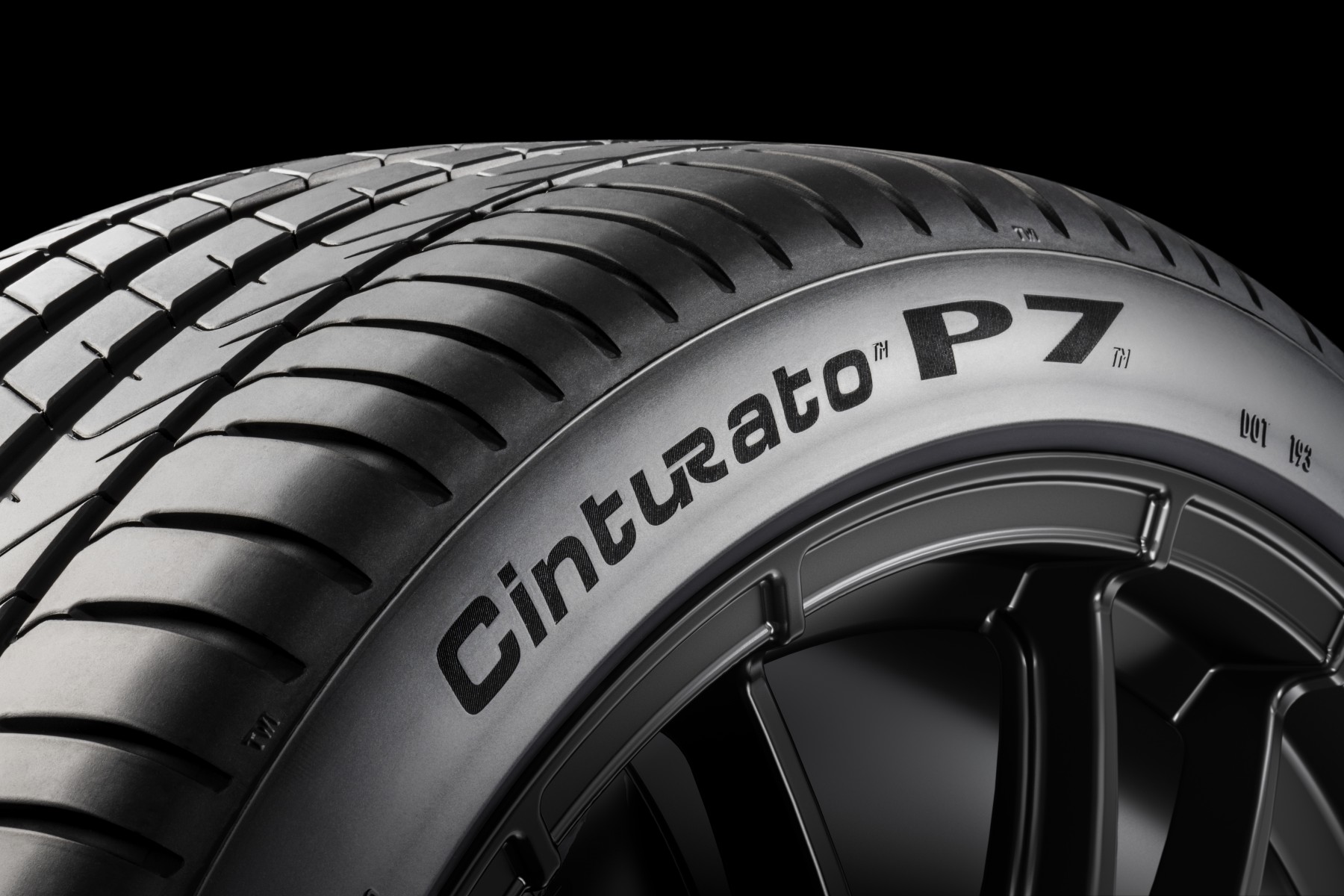 Milan, May 25th, 2020 – The new Pirelli Cinturato P7, a high-performance summer tyre, delivers increased safety, efficiency, and sustainability. It follows on in the great tradition of the Cinturato, with 70 years of history behind it, as well as capitalising on all the lessons learned from the continuous development of the previous-generation P7. This new tyre is already on sale in preparation for summer, making its debut in all European and Asian markets.

SAFETY IS AN EVEN BIGGER PRIORITY

A survey commissioned by Pirelli, which took place between the end of April and beginning of May among drivers using tyres in 18-inch size or higher, highlighted the tendency for increased car use in future – especially while social distancing measures are in place. In China, 68% of respondents said they would use their cars more, in Italy the figure was 31%, and in Germany 20%.

More than 50% of people surveyed said that they wanted to change tyres before the end of the year to ensure optimal safety for their cars. The criteria governing their choice showed increased attention to tyre reliability and quality: the percentage of respondents prioritising safety characteristics increased to 59% in Germany, 78% in Italy and 86% in China.

Starting from the previous generation launched in 2009, which has become a homologation leader, the Cinturato P7 has been constantly updated and improved thanks to the close partnerships between Pirelli and the world’s premium car makers.

The latest generation of Pirelli Cinturato P7 highlights what the biggest priorities are for today’s modern motorists: safety and efficiency. Pirelli’s engineers, through an intense programme of research and development, have come up with a product featuring high levels of technology able to overcome the typical compromises associated with tyres. The new technologies created for the Cinturato P7 are capable of reconciling conflicting requirements, such as performance in the wet and low rolling resistance, achieving a new technological standard to satisfy drivers and car makers all over the world. The technical innovations on the latest Cinturato include a new compound equipped with a type of ‘mechanical intelligence’ that can change according to ambient temperatures: a bit like having two compounds in one.

SAFETY ABOVE ALL, BUT ALSO COMFORT AND RESPECT FOR THE ENVIRONMENT

Safety is the key characteristic of the new Pirelli Cinturato P7. As well as improving on the dry handling of its predecessor, Pirelli’s new tyre for premium cars also greatly improves wet handling, aquaplaning and braking in particular: taking four metres less to come to a stop from 100kph. The innovations introduced by Pirelli’s engineers also improve acoustic comfort (thanks to less road noise) and ride comfort, with the new tyre better able to absorb bumps in the road. Overall tyre life increases by six per cent, meaning that tyres have to be changed less frequently. Rolling resistance also goes down by an average of one class (minus 12%), improving fuel consumption by four per cent (measured on the WLTP cycle) as well as CO₂ emissions.

THE ‘INTELLIGENT’ COMPOUND THAT ADAPTS TO TEMPERATURE

The new-generation Cinturato P7’s innovations start with the key element to every tyre: the tread pattern, which is contact with the road. The tread pattern specifically created for the new Cinturato P7 is enriched with silica and specific resins that help to increase grip and enhance the function of the tyre’s polymers. These are synthetic elastic materials that are chemically modified to improve the interaction with silica – and these polymers can change according to the tyre’s working temperature. This means that the new compound benefits from a sort of ‘mechanical intelligence’ thanks to better distribution of the silica particles and more effective interaction between them. As a result, the tyre’s characteristics can alter according to driving and temperature conditions, giving the driver an extremely wide optimal working range.

A TREAD PATTERN BORN OUT OF VIRTUAL REALITY

Every part that makes up the tread pattern of the new Cinturato P7 has a specific function: from the lateral and longitudinal grooves whose pattern is specifically intended to evacuate water in the most efficient way possible, to the specific shoulder blocks designed to deliver the minimum possible stopping distances both in the wet and the dry. Not only that, but the actual design and rigidity distribution of these blocks allows the new Cinturato to have the biggest possible contact patch through corners, delivering a safe and precise driving experience in all conditions (which also benefits comfort). Having been brought to life virtually on computer and then tested physically, the design process optimises both ride and acoustic comfort for the driver.

REDUCED BRAKING DISTANCES THANKS TO DIALOGUE WITH ELECTRONICS

Another area that Pirelli’s engineers have worked on is the tyre’s capability to ‘talk’ with existing electronic driver aid systems. In the case of ABS, for example – assuming the same car and tyre size – a tread pattern optimised to work in synergy with the car’s own electronics is able to brake sooner. Tests carried out when braking from 100kph have shown that the new Cinturato P7 needs an average of four fewer metres to stop: a reduction of between seven and 10%. The development of the new Cinturato in collaboration with the world’s leading carmakers, through virtual tyre models, has meant that the tyres can be optimally tuned to work together with existing driver aids. One good example is lane control systems. If twinned with an ‘unknown’ tyre, these systems can potentially make continual corrections, as they are not familiar with the specific dynamics of the tyre. If the same car is equipped with a new Cinturato P7, complete with the marking that distinguishes it as having been made for that particular manufacturer, the car’s lane departure system will not request these continual corrections, as it will know the tyre ‘by heart’.

MORE GRIP AND LESS WEAR THANKS TO NEW MATERIALS

The materials created for the new Pirelli Cinturato P7 offer greater mechanical resistance as well as guaranteeing better grip in all sorts of different driving situations. The reduced wear from this ‘high mileage’ compound means that a longer distance can be covered on a set of tyres and motorists can save money. This is thanks to the use of polymers in the compound that have a high molecular weight: in other words chains of chemical elements that are very long and so give the tyre certain mechanical properties such as greater resistance to abrasion and increased durability. The tread pattern compound was designed alongside the tyre as a whole, to deliver an optimum balancing of the tread system, that optimises the tyre’s footprint to the road, reducing heat generated while driving and contributing to an increase in grip yet reduction in wear.

Having increased the mechanical resistance of the compound, not only is less material needed for the tread pattern (while maximising the overall tyre life) but also the overall weight of the tyre is reduced thanks to a complete review of all the materials used. Less material means less weight, decreased rolling resistance, and a more mindful use of resources. All this leads to lower fuel consumption, which saves every motorist money and reduces the impact on the environment. Pirelli’s engineers also worked on the reinforcement materials, without compromising the structure of the new Cinturato P7. The use of cords that are highly resistant to traction means that fewer of them can now be used, additionally contributing to weight reduction. Getting overall weight down was one of the key requests from car manufacturers, helping them meet increasingly stringent emissions targets worldwide.

ELECT, RUN FLAT AND SEAL INSIDE: PIRELLI’S TECHNOLOGIES TO HELP EVERY CUSTOMER

The new Cinturato P7 is born with Pirelli’s best-known technologies, adapted for all the different new car models that the tyres are homologated for – or to answer the needs of motorists who have specific requirements. These include the recently-launched Pirelli Elect range – a package of technologies specifically tailored for electric or plug-in hybrid cars – featuring instantly available grip to suit the strong performance characteristics of electric engines, lower rolling resistance to maximise battery range, and reduced noise to benefit from the quietness and comfort of electric power. The new Cinturato P7 can also include Run Flat and Seal Inside technologies, which allow drivers to keep going even after a puncture. The first system uses reinforced sidewalls to support the weight of the car; the second deploys a special mousse that can instantly plug holes that are up to four millimetres wide.

Development of the new Cinturato P7 started around three years ago. Before the aftermarket versions, the original equipment tyres homologated by manufacturers were created, for cars that will hit the road in the coming weeks. The new P7 arrives with more than 70 homologations to its name already, and by the end of 2020, that figure is expected to grow to over 100. Each one of these specific homologations requires a specific research and development programme, carried out in tandem with every carmaker involved. In particular, with ‘marked’ tyres created for cars with 17-inch rims or bigger, the Cinturato P7 already has 23 homologations alongside the 100 plus gained by its predecessor. This confirms Pirelli’s Cinturato P7 as being the class leader, most commonly chosen by premium carmakers.

PIRELLI’S NEW CINTURATO P7 ARRIVES: THE TYRE WITH AN ‘INTELLIGENT’ COMPOUND THAT ADAPTS ITSELF TO TEMPERATURE AND DRIVING CONDITIONS