Pirelli's partnership with Rosneft in Russia 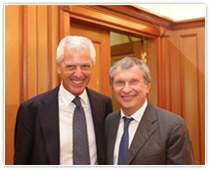 Under the terms of a memorandum of understanding signed in April 2013 by Igor Sechin, Rosneft Chairman, and Marco Tronchetti Provera, Pirelli Chairman and CEO, in final quarter 2013, the first Pirelli “P Zero™ Platinum” flagship store is to be opened at the Rosneft service station in Sochi, in the Krasnodar region, with completion scheduled for the end of third quarter 2013. In addition, the two companies continue to work towards opening other Pirelli stores in Rosneft service stations that have been selected in nine areas of Russia under the terms of a preliminary plan: central Moscow, Moscow region, Saint Petersburg, Saratov, Rostov region, Krasnodar region, Volgograd, Samara and Voronezh. The two companies have also discussed implementation of the Pirelli “Safe & Go” tyre check service that will allow the country’s motorists to enjoy a safe journey. The service will offer Rosneft customers a mini tyre check-up and discounts on new Pirelli tyres at participating service stations. The “Safe & Go” service is due to be launched in Moscow in October 2013. Finally, in the autumn, a Pirelli delegation is to visit the Nairit rubber production plant in Yerevan, Armenia in order to assess possible investment opportunities.