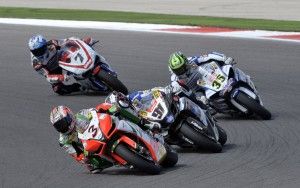 Back in Portimão after just five months allows for some incredible tyre developments, seen already in Race 1 when six riders on five different bikes quickened the lap record as much as 0.75 seconds and the final race time by 16 seconds. After just one year from the start of Aprilia's renewed SBK project, Biaggi has found the ideal tyre performances to take his first double win. All these impressive results come from Diablo Superbike SC2 front and SC1 rear tyres recently inserted in the Pirelli racing range, based on confirmed solutions from the previous season. The eventful races and diverse podiums filled by the four manufacturer's bikes of Aprilia, Suzuki, Honda and Yamaha were no surprise, as starting from the 2nd Superbike practice, the first 18 riders were seperated by only 1.27 seconds. The FIM Superstock 1000 was also notable as congratulations to BMW Motorrad Italia on their first win in the class, to Berger (Honda) who brought down the Lap Record by 1 second, and the final podium filled with three different manufacturers - BMW Honda Yamaha -