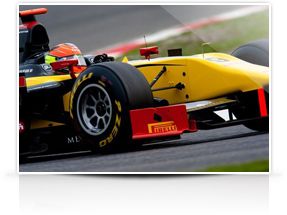 The feature race of the final GP2 Asia round took place today at Imola, with Pirelli equipping a full grid of 26 drivers with its PZero medium slicks. Pirelli's Racing Manager Mario Isola explained: "We decided to bring our medium slicks to Imola because this circuit has a very technical layout. Along the track, there are several heavy breaking areas that demand a lot from the brakes, and consequently the tyres. With a complex series of corners and comparatively few straights, the tyres tend to overheat and there aren't many chances for the rubber to cool down during the race. Our PZero medium slicks provide an excellent balance in terms of on-track durability and overall performance; we were very pleased with them throughout Friday and Saturday." During Friday's practice and qualifying sessions, the PZero medium slicks proved to be well-suited to the track conditions, which consisted of dry asphalt with ambient temperatures ranging from 17 to 26 degrees centigrade throughout the day. Qualifying got underway in the afternoon with Romain Grosjean (Dams) securing a last minute pole position thanks to a best lap time of 1:27.067, followed by Sam Bird (iSport International) and Michael Herck (Scuderia Coloni). Saturday's race was held in the afternoon on a cool and dry track. Polesitter Romain Grosjean (Dams) dominated the action, setting a fastest lap of 1:28.097 and securing his first win of the season. The former Pirelli Formula One test driver now leads the drivers' standings on 23 points. Like most of the drivers, he managed his PZero tyres perfectly for 14 laps before pitting for a fresh set. Shortly afterwards he was back in front followed by Giedo Van der Garde (Barwa Addax) and Jules Bianchi (Lotus ART), who finished second and third respectively. The sprint race will take place on Sunday, March 20 at 14:00 local time.