When Sebastien Loeb won Rallye Deutschland for a seventh time in 2008 he equalled Marcus Gronholm’s record for the most wins on a world championship qualifier. With the Trier-based rally not running in 2009, organisers used the intervening 12 months to make a few tweaks to the event itinerary by adding a new stage and increasing the competitive distance by more than 50 kilometres. 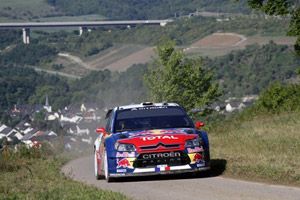 But while the event format has changed, there was a distinctly familiar face standing at the top step of the podium on Sunday afternoon after Loeb swept to his eighth victory on the punishing asphalt roads through Germany’s Mosel and Saarland regions to add another record to his impressive list of achievements. Driving a Citroen C4 World Rally Car on Pirelli’s PZero tyre, the six-time world champion was fastest on nine of the event’s 19 special stages, which covered a total distance of 407.31 competitive kilometres, making it the longest round of the WRC so far this season. His win, alongside co-driver Daniel Elena, was his 59th in the world championship. After beating Citroen team-mate Dani Sordo by 51.3 seconds in the final classification, Loeb said: “It’s a good win for me and I’m really pleased but I have to say this was not my best victory in Germany. The weather was dry from the start so the conditions were not as difficult as they have been in the past. That meant there was less pressure on me and less satisfaction to have won. But it was still not easy because this is always a difficult rally with lots of surface changes. However, I had no problems with my tyres and the wear rate was good, even on the [48.00-kilometre Panzeplatte] stage.” As well as remaining dry, baking hot sunshine coated the rally route throughout the weekend with ambient temperatures peaking at 31 degrees centigrade and the ground temperature rising to 40 degrees centigrade on Saturday afternoon. Matteo Braga, Pirelli’s senior WRC tyre engineer, was delighted with how the Italian company’s PZero tyres had performed during the three gruelling days of competition. “It has been another successful rally for Pirelli,” said Braga. “We have seen a few cars come back to service with broken wheel rims, caused by hitting kerbs or stones, but with the tyre still inflated or not damaged. This is very good because it proves the reinforced side walls that feature on the Pirelli PZero tyres work really well and do their job. In fact there have only been three punctures where the tyre has been damaged, which is very impressive because this is a long rally with many surface changes.” Pirelli made available its hard and soft compound PZero tyre for Rallye Deutschland. The soft compound version is designed for cool and wet conditions, while the hard compound is designed for hot, dry weather. Mario Isola, Pirelli’s Rally Manager, explained: “In the morning stages most drivers opted for the soft compound tyre because it provided better grip but in the heat of Saturday afternoon some drivers, including Sebastien Loeb, chose the soft compound tyre, which can work when the surface is less abrasive and the corners are not so long. It was an experiment by him but we found that while there was some degradation, it did not cause a performance disadvantage. This is very satisfying because it showed the performance of this compound can be good in hot conditions.” As well as supplying tyres to the main WRC field as part of a three-year agreement with the FIA, the governing body of world motorsport, Pirelli’s PZero tyres are used as standard by competitors in the Super 2000 World Rally Championship, which was fought out between P-G Andersson, Martin Prokop and Patrik Sandell. After three days of close competition, Sandell prevailed by 4.7s. The Production Car World Rally Championship crews also use Pirelli PZero tyres as standard. Armindo Araujo, the reigning class champion, took the honours in his Mitsubishi Lancer Evolution X ahead of Pirelli Star Driver Hayden Paddon, who impressed at the wheel of a similar car. A joint initiative between Pirelli and the FIA, the Pirelli Star Driver programme gives the opportunity for five promising young talents, Nick Georgiou, Peter Horsey, Paddon, Alex Raschi and Ott Tanak, to contest six rounds of the World Rally Championship in identical Pirelli-backed Mitsubishi Lancer Evolution Xs. While Paddon starred, his team-mates were not as fortunate as they continued their WRC initiation. Hans Weijs Jr took victory in the Junior World Rally Championship category in his Citroën C2 Super 16000 using Pirelli’s RX tyre, which was used by crews in the young driver class for the first time on Rally Bulgaria in early July. The World Rally Championship resumes on the gravel-based Rally Japan from September 8-12. Pirelli will provide its Scorpion tyre in soft compound only to take into account the cold and damp conditions that characterise the Sapporo event.