Nine-time world rally champion Sebastien Loeb triumphed at the penultimate round of the Pirelli-supported FIA GT Series which took place in Navarra, Spain, over the weekend as the Frenchman claimed his first ever GT championship win in the McLaren alongside team-mate Alvaro Parente. As the official tyre supplier to the FIA GT Series, Pirelli was trackside at Navarra to supply its P Zero slicks and P Zero wets to a variety of marques including McLaren, BMW, Lamborghini and Ferrari. Pirelli has a strong track record of supplying rubber to manufacturers competing in the top echelons of endurance racing and this year’s FIA GT Series has benefitted from new tyre sizes for front and mid-engined cars. Loeb and Parente started a near-perfect weekend in Spain after taking a convincing win at a wet qualifying race on Sunday morning which saw most teams running on Pirelli slicks. Two crews opted to run on Pirelli slicks but it was evidently the wrong choice as the lack of grip on the wet track meant they lost around 10 seconds each lap compared to those running on the wets. The rain subsided in time for Sunday afternoon’s main race and the crews swapped back onto Pirelli slicks before taking to the grid. Loeb and Parente continued their dominance to seal a lights-to-flag race victory: the duo’s first win of 2013 despite winning three qualifying races already this season. They were closely followed home by the sister Sebastien Loeb Racing McLaren MP4-12C which was driven by Andreas Zuber and Mike Parisy. “I started in pole position, just like in Slovakia but this time we had no trouble and the car was fantastic,” said race winner Loeb at the finish. “I was happy to see Andreas (Zuber) behind me after the first corner - we made a great race together, we were both pushing a lot and he was very close. This morning, it was the third time that we won the qualifying race but now it is the first time we have finally won the main race. It was a great weekend for the whole team so I am really happy for them.” Completing the podium at Navarra was Germany’s Frank Stippler and Sweden’s Edward Sandstrom in the Belgian Audi Club Team WRT Audi R8 LMS ultra. Their race had started in dramatic fashion when the front left brake disc had to be changed on the grid immediately prior to the start. Claiming their sixth category race win of the season, Sergei Afanasiev and Andreas Simonsen now look set to clinch the 2013 Pro Am driver’s title by taking maximum points once again in Navarra. 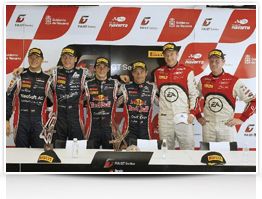 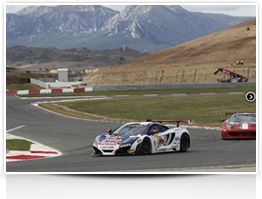 Pirelli’s senior tyre engineer Matteo Braga commented: “It was a very interesting weekend with variable conditions, which meant that race strategy was extremely important. It also meant that all the tyre choices had to be made at the last minute. The Navarra circuit tended to favour cars that had the best traction through slow to medium speed corners. The McLaren drivers made no mistakes at all, while others were unlucky, such as Audi, Mercedes, BMW and Lamborghini – which nonetheless proved to be competitive by clinching pole and finishing third in the qualifying race with the Grasser team. Our tyres performed well with no problems at all despite the unpredictable weather, which meant that everyone had to change from slicks to wets just before qualifying.” The 2013 FIA GT Series finale will take place in Azerbaijan for the first time as the crews take on the inaugural Baku World Challenge by Aztexnika over 22-24 November.