GP2 review: Singapore Grand Prix, 20-22 September The two softest tyres in Pirelli’s GP2 range, the P Zero Yellow soft and P Zero Red supersoft, were nominated for the Singapore races: which have set up a thrilling championship finale in Abu Dhabi. This nomination allowed the teams to make use a number of different race strategies, which proved crucial to success at the Marina Bay circuit. Singapore is well-known as a track that is not easy to overtake on, meaning that drivers aimed to use race strategy to boost their track position. The supersoft, with its rapid warm-up time, was quicker over one lap and in qualifying but the soft tyre, with its greater durability, had the advantage over a race distance. While the Marina Bay circuit does not usually lead to excessively high levels of wear, tyre management was still crucially important because with the highest number of corners of any track on the calendar, the tyres do not get any long straights to cool down on. As opposed to the Singapore Grand Prix, GP2 does not race at night; meaning that ambient and track temperatures are higher. Managing thermal degradation proved to be essential for victory. Carlin’s Jolyon Palmer topped free practice and qualifying, taking his first GP2 career pole on the P Zero Red supersoft: the default option for qualifying. Unlike Formula One, the drivers do not have to start the race with the tyres that they qualify on, so whether or not they used the supersoft at the start of the race formed the backbone of the strategy. Palmer chose to start on the soft tyre, but was passed by his team mate Felipe Nasr at the start, who also used the soft for his first stint from second on the grid. Fabio Leimer (Racing Engineering) was the highest-placed driver to start on the supersoft, moving up to second at the start from third on the grid. 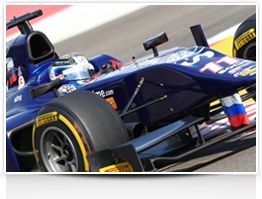 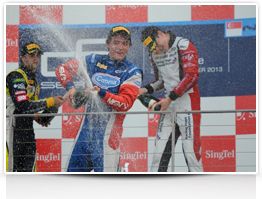 But the supersoft drivers experienced greater degradation as well as extra speed, which meant that most made their compulsory stop as soon as the pit stop window opened. Palmer was able to build a substantial cushion and then change only the rear tyres for more softs on lap 11. However, he found himself around 25 seconds behind Nasr (who had already stopped, on a similar strategy) when he exited the pits, forcing the Briton to catch and pass his team mate over the remaining 16 laps. He did this by using his fresher tyres to brilliant effect by setting a string of fastest laps. ART Grand Prix driver James Calado adopted a different strategy to finish third: starting on the soft tyre and finishing the race with a short final stint on the supersoft, where he was able to use the additional speed of Pirelli’s softest compound to great effect. Palmer said: “I was on the same strategy as Felipe and I knew it was going to be quite tough on the tyres, but it was definitely the best strategy I think. He pitted a little bit earlier so my tyres had three laps spared which makes a bit of a difference. Then, really, I was trying to be as careful as I could whilst going as quick as I could. So it’s always a balancing act. Maybe he pushed a little bit too hard early on. From the pitwall I can imagine they were quite nervous that I was putting in the times, but I was confident in the car where you can feel a lot more what is going on with the tyres.” Tyre strategy was just as important in the 20-lap sprint race on Sunday, with no compulsory pit stops. The grid was formed of the top eight finishers from Race One reversed, meaning that Russian Time driver Sam Bird was on pole. He took a lights to flag victory using the soft tyre: his fifth victory of the season that allowed him to close up to within seven points of championship leader Leimer with just one round remaining. Bird was helped by having used the supersoft tyre at the start of Saturday’s feature race, meaning that he had a set of softs saved for the sprint race. Pirelli’s racing manager Mario Isola concluded: “Singapore all came down to strategy and the tough conditions meant that the drivers had to manage their tyres carefully with a view to the sprint race as well. Palmer drove a stunning race on Saturday and used his tyres perfectly to take a well-deserved win, against strong opposition from his team mate who used the same strategy. Bird also judged his tactics precisely to win on Sunday and set up an exciting finale to the championship. Our latest generation of GP2 tyres have been an integral part of the show this year, with Singapore giving us yet another spectacular race that revolved around tactics as well as pure speed.” This year’s GP2 season takes in 11 rounds and 22 races. The final round of the Pirelli-equipped series takes place in Abu Dhabi from November 1-3.