As Pirelli announced its comeback to Formula One for the first time in 20 years, the new 13-inch PZero soft compound GP3 tyre made its debut at the Valencia street circuit for round three of the all-new series. The medium compound tyre was used for the first two rounds, in Barcelona and Istanbul Park. At Valencia, the soft-compound tyre - designed to deliberately degrade and slide - made its first appearance. 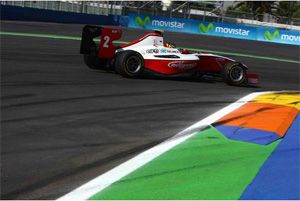 The demanding street circuit, which runs around the famed America's Cup harbour in Valencia, incorporates a wide variety of speeds and corners, testing the drivers and 280-horsepower cars to the limit. The challenge was made even greater by sustained high temperatures in excess of 30 degrees Centigrade. All 30 drivers had a chance to test their cars the week before the race in Valencia, but conditions could not have been more different. For a start, the test took place at Valencia's permanent circuit, instead of the street track, using the medium-compound rather than soft-compound tyres. The test was also held in changeable weather conditions, including some rain that disrupted proceedings. However, one thing that remained constant was the pace of ART driver Esteban Gutierrez from Mexico. He topped the test times, and a few days later claimed pole position for race one on the soft-compound Pirelli tyres. When the lights went to green he was gradually able to pull out a winning margin over the course of the half-hour race, setting fastest lap at the same time. Canada's Robert Wickens was second (to move up to second in the championship) while Spaniard Roberto Merhi - making his GP3 debut - finished an impressive third. The second race, held on Sunday morning in front of all the Formula One teams and Grand Prix crowds, was won by Swiss driver Nico Muller, who started from second on the grid to claim his first victory. The front of the grid for race two is formed of the top eight from race one reversed, with the rest of the field starting in their race one finishing order. Merhi was second in the race to crown an extremely successful weekend for the local hero while pole-sitter James Jakes was third. In the championship, Gutierrez has extended his lead while Wickens is second. American driver Alexander Rossi had a weekend to forget in Valencia and so drops to third in the standings. ART Grand Prix leads the teams' standings from Manor Racing and Jenzer Motorsport. Pirelli's Racing Manager Mario Isola commented: "With the introduction of the new soft tyre, we are clearly on the right road as we noticed that there was more degradation and sliding, just as we intended. However, it's also clear that we can go a bit further in this direction to improve the show, and that is something we will work on for the future. Despite the unique conditions of this fast street circuit, the tyres were very consistent during each race and session, enabling the drivers to assimilate accurate information about set-up, which is very important as the emphasis in the GP3 Series is firmly on learning. The quick entries into tight corners meant that a number of drivers were locking up their brakes, but even so there were no major problems with flat spots and vibrations, which is very good to know." The next two races of the eight-round GP3 Series takes place at the British Grand Prix in the newly developed Silverstone circuit in England from July 10-11.
Newsroom

PIRELLI: CONTAINS COVID-19 EFFECTS, ADJUSTED EBIT POSITIVE 66.7 MILLION
PIRELLI PRESS RELEASE
Pirelli is ready to face Portimão for the third round of the MOTUL FIM Superbike World Championship
2020 British Grand Prix - Race
At the Pirelli Spanish Round in Jerez Rea takes the Superpole® Race while Redding wins Race 2, Locatelli does the double in WorldSSP. The winning solutions in the Superbike range are confirmed, used b
2020 British Grand Prix - Qualifying
×