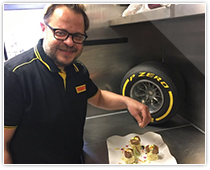 Pirelli works at full speed in the kitchen as well as on the race track. From this year, Pirelli’s chef at every grand prix of FORMULA 1 - to which the Italian company is exclusive supplier since to the end of 2019 - is Spyros Theodoris, the winner of the inaugural Masterchef Italia competition in 2011. His origins are Greek, but these days he couldn’t be more Italian. At every race weekend, he prepares haute cuisine at the highest level in record time, but without compromising on quality or variety. His five-star culinary creations served in Pirelli’s hospitality represent the highest standards of cuisine at grands prix, where the Italian firm welcomes hundreds of guests during every race weekend. Drivers, team members, journalists and celebrities: a true cross section of society holds Pirelli’s food in high esteem, which is cooked to order in a distinctly Italian style, while acknowledging a variety of international influences. The food perfectly reflects the nature of grand prix racing itself, which visits around 20 different 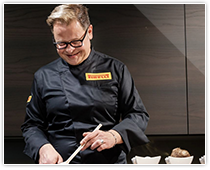 countries every year. Five years ago, the Miles and Meals book published by Pirelli shared some of the most popular recipes from every grand prix, together with lavish photographs and illustrations. The book was a huge success, and is still in demand today. But it won’t be long before Miles and Meals enjoys a second youth in a video format for the internet.