Successful debut for Pirelli in the Hill Climb Championship 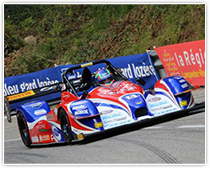 The new Pirelli tyres made a successful debut in the hill climb races. At the opening event of the FIA European Hill Climb Championship, the Italian tyres delivered excellent results thanks to driver Simone Faggioli, who also took part in the tyre development process. The Course de Cote de Saint Jean du Gard Col, opening race of the most important European hill climb championship, was held in France and put the tyre’s traction and cornering stability performance to a hard test. Faggioli, driving the Norma M20 FC Zytek, won the season opening event and took home a new race record on the first hill climb race, using supersoft tyres which ensured maximum grip. The racing slicks are marked with red lettering, just as their Formula One counterparts. The new Pirelli product for hill climb races comes in two versions for all the racing classes: slick (available in soft and supersoft compounds) and the Cinturato rain. The tyres are available in 250/575-13 and 315/660-13 sizes and rely on the FORMULA 1 technology.

Successful debut for Pirelli in the Hill Climb Championship
Newsroom

PIRELLI TO REMAIN EXCLUSIVE TYRE PARTNER TO FORMULA 1 UNTIL 2024
PIRELLI: DOCUMENTATION FOR SHAREHOLDERS’ MEETING CALLED FOR 24 MARCH 2021 PUBLISHED
PIRELLI TO TEST 2022 18-INCH F1 TYRES FOR 28 DAYS THIS YEAR
SNOW, ICE AND FROZEN GRAVEL FOR THE DEBUT OF THE PIRELLI SOTTOZERO ICE J1 IN FINLAND
PIRELLI: BOD APPROVES THE TERMS FOR THE TERMINATION OF THE CONTRACT OF EMPLOYMENT WITH ANGELOS PAPADIMITRIOU
Pirelli enters into the 2021-2023 period as Official Tyre Supplier of the WorldSBK Championship, which will mark the 20th season of collaboration with WorldSBK
×