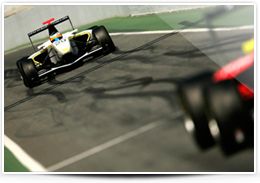 Pirelli enters its second year as sole tyre supplier to the GP3 Series, having successfully completed its 2011 pre-season tests, which finished in Barcelona last Thursday. A total of eight days of testing were completed, with Pirelli supplying its soft compound tyres at Paul Ricard (3-4 March) as well as its hard compound slick tyres at both Silverstone (29-31 March) and Barcelona (12-14 April). Throughout the tests, the young GP3 drivers had the opportunity to gain a solid understanding of how the new Pirelli rubber performs and how best to manage their tyres on track. In line the requirements of the GP3 organisers compound specifications have been altered from 2010 to provide a higher level of performance with less durability to teach GP3 drivers the importance of good tyre management. In France, rain and cool weather conditions formed the backdrop to the Paul Ricard test. Running on a wet to damp track in low ambient temperatures, the drivers also had the opportunity to sample the wet P Zero tyres. This was a good opportunity for drivers to get familiar with driving in changeable conditions. Mixed track conditions and low ambient temperatures were also experienced at Silverstone. Both the wet and the hard compound tyres were tested this time. As was the case in France, the new Pirelli P Zero slick tyres experienced a drop off in tyre performance in keeping with the request of the GP3 organisers. Finally the hard compound tyres took to the track in Barcelona last week. In Spain the weather was mild and dry, with temperatures ranging from 15 to 35 degrees centigrade.  Despite the wide range of temperatures, the P Zero hard compound tyres performed very effectively at the Spanish venue.  Pirelli’s racing manager Mario Isola commented: “Following the GP3 organisers’ requests, we’ve enhanced the compound specification by actually designing less durable tyres for this year, compared to last year in GP3 when they lasted longer and were much easier to produce. These pre-season tests were the first opportunity for the GP3 drivers to try out the new rubber and they all did very well, although managing increased levels of tyre degradation was a new experience for them. One of our key priorities at Pirelli is giving opportunities to young and talented drivers. The art of tyre management is crucial for any driver’s career: at the beginning it might be a bit tough but at the end of the season I’m sure they will thank us for having helped them to improve their racing skills.” The 2010 GP3 Series came to a close with Pirelli’s P Zero tyres taking 19-year-old Esteban Gutierrez to the title. The Mexican will continue to drive on Pirelli tyres in GP2 this year. He said: “Pirelli’s tyres were very good last year, working in a very consistent way throughout every weekend. Maybe though they were too good and we did not have as much degradation as we would like. Now that the compound specifications have changed I think it is a positive move: having tyres with a bigger degree of degradation is great for the drivers as they learn more. It makes races more interesting as well.” This year, a full grid of 30 drivers will be back on track once more, driving their identical 280bhp GP3 cars equipped with Pirelli’s P Zero tyres. The calendar takes them from Istanbul to Monza, stopping off at Barcelona, Valencia, Silverstone, Nurburgring, Budapest and Spa-Francorchamps. Having already raced on most of these tracks last year, Pirelli will be able to make good use of the experience gained and provide the 10 GP3 teams with all its technical know-how and dedicated service. The 13-inch Pirelli GP3 tyres will next be seen on track at Istanbul for the first round of the championship from 7-8 May, during the same race weekend as the Turkish Grand Prix.