Superbike opens by lowering lap times by one second 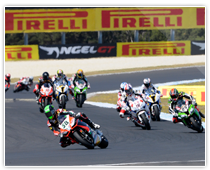 As the 2013 season of the Eni FIM Superbike World Championship opened, it became apparent that the new Pirelli 17-inch Diablo Superbike tyres had experienced a significant improvement in lap time, compared to the 16.5 inch tyres of last season. Aprilia Racing Team riders Eugene Laverty and Sylvain Guintoli took best advantage of Pirelli’s offering for the Australian round, claiming first and second step on the podium ahead of Michel Fabrizio (DRM Devils Roma) on an Aprilia RSV4 Factory (3rd in Race 1 and 4th in Race 2) and Ravenna’s Marco Melandri from the BMW Motorrad GoldBet SBK Team on a BMW S1000 RR. It was not just the riders who stole the headlines during the island’s weekend racing which was watched by more than 60,000 fans, but also the Pirelli tyres. On a difficult circuit full of unknown factors, including new asphalt, testing had been minimal in the months leading up to the race. Indeed, almost all the left-hand turns on the Phillip Island track, one of which is 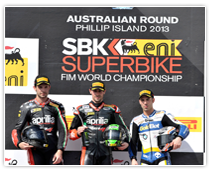 exceptionally fast, place a tyre’s left side under great stress. In Superbike, two options proved successful and were most popular with all riders: a rear SC1 R1299, a medium compound with carcass and internal materials designed to keep tyre temperatures lower by preventing overheating; and a front SC2 R982, also a medium compound, ideal for high external temperatures, giving solidity to the tread.

Superbike opens by lowering lap times by one second
Newsroom