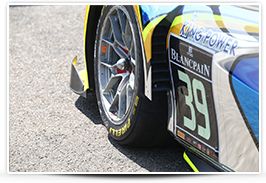 Team WRT, with drivers Stuart Leonard and Robin Frijns in their Audi R8 LMS, has won the highly competitive qualifying race today at Zolder in Belgium by less than a second: putting them on pole for tomorrow’s main race at 15.30. The entire grid used the Pirelli P Zero DHD tyre in the particularly hot weather condions today. Quote: Matteo Braga (Pirelli circuit activity manager): “It was an exciting qualifying race and Audi showed good pace and performance in all stints, and also completed a great tyre change during the race. The accident at the beginning was very unfortunate for McLaren as they also showed good performance in the qualifying sessions earlier in the day.” Fact of the day: Stoffel Vandoorne, Formula 1 driver for McLaren, attended Zolder today in his home country to wave off the start of the qualifying race. The Belgian from Kortrijk previously competed in the FIA GT championship, the predecessor to the Blancpain series, with a Boutsen McLaren in 2013. Number of the day: 1300. The total number of tyres Pirelli has brought to Zolder for the Blancpain GT grid.