The 2015 F1 tyres confirms its performance in Spain 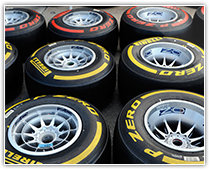 The pre-season FORMULA 1 tests held in Spain confirmed the increase in performance of the 2015 Pirelli tyre range. After four days of testing in Jerez the eight teams covered more laps compared to last year, showing the phenomenal rate at which the hybrid technology is developing. The varied weather conditions on a very abrasive track didn’t cause problems to the testing,  with generally positive comments from the drivers. In Jerez, the ‘winter hard’ prototype compound was also available.  The prototype is not included in the P Zero 2015 range and it is has been specifically created for the tests and for the weather conditions encountered in Europe in February.  The tyre is characterized by a hard compound with a fast warm-up, in order to ensure the best performance even in cold conditions. After the testing in Barcellona, the teams were able to work on a varied circuit, in order to investigate every aspect of the tyre behaviour and to acquaint themselves with the characteristics of the 2015 Pirelli range. At Montmelò too, many of the testing lap times were  inside last year’s pole position. Here the teams had the chance to also try out a prototype medium, which is being assessed by Pirelli for development purposes. The Pirelli 2015 tyre range features a new rear construction, which distributes temperature more evenly and also contributes to a reduction in lap time. The supersoft tyres is also characterized by a new compound. As was the case last year, Pirelli will be sponsoring of the FORMULA 1 Gran Premio de España in May, and the FORMULA 1 Magyar Nagydíj in July.

The 2015 F1 tyres confirms its performance in Spain
Newsroom