The Cinturato RW wet tyre makes its debut in Germany 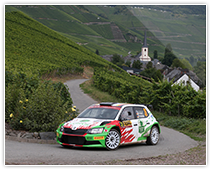 The Rallye Deutschland, one of the most arduous rallies on the entire World Rally Championship, was the perfect place for Pirelli to introduce the new Cinturato RW wet tyre for heavy rain, in 235/40-18 size, alongside the proven P Zero RK asphalt tyre. Every single type of weather was encountered during the Rallye Deutschland weekend, making tyre and set-up choice particularly challenging throughout all three days. On the first day, the roads were largely dry with damp patches. On day two, the morning was mixed, but heavy rain in the afternoon allowed the Pirelli drivers to use the new Cinturato RW rain tyres, which have been especially designed to maximise grip and water expulsion in full wet conditions. The short final day was slightly damp in the morning, then dry in the afternoon. Pirelli’s rally activity manager Terenzio Testoni said: “As we expected, Germany provided one of the most challenging and changeable asphalt rallies of the entire championship, with an enormous range of conditions encountered. The most difficult day was Saturday, with heavy rain in the afternoon, meaning that the new Cinturato RW full rain tyre could make its debut. In particular, the drivers praised the safe feeling that our new tyre gave them, in spite of the marginal conditions. This allowed us to secure another podium in WRC2 against factory-backed opposition, in keeping with our philosophy this year of supporting privateer drivers.”