The GP2 drivers face a new challenge with Pirelli in Bahrain

Bahrain GP2: Bahrain, 20-22 April 2012 After a successful start to the season in the hot and humid conditions of Sepang two weeks ago, the GP2 Series – the official feeder championship to Formula One – resumes with a double-header in Bahrain. This means that as well as two races alongside the Bahrain Grand Prix this weekend, there will also be two races as part of a stand-alone event next weekend, meaning a packed schedule of competition for the up-and-coming stars of the future. While Malaysia presented a unique challenge for the tyres, Bahrain is even more demanding due to the extremely high temperatures that are expected, in excess of 35 degrees centigrade. The other peculiarity specific to Bahrain is the sand that can blow onto the track from the desert, reducing the grip available and making the cars slide more, which in turn increases tyre degradation. Just like Malaysia, the drivers will have Pirelli’s P Zero hard and medium compound GP3 tyres at their disposal. These tyres carry silver and white markings respectively, just like the Formula One tyres. They are also the same 13-inch size as the Formula One tyres, but use different compounds and constructions that are specifically tuned to the broader demands of GP2. Four sets of tyres will be available to all the drivers for each race weekend: three sets of the harder compound and one set of the softer compound. This gives the drivers an element of choice in the tyres that they can use for the races, but unlike Formula One there is no obligation to use both compounds during the race. How the drivers use their allocation over the course of the race weekend is of crucial importance to the final result, as Brazilian Luis Razia, who currently leads the GP2 drivers’ championship standings, proved at the most recent round. The grip problems caused by the sandy track surface in Bahrain are worse for the 26 GP2 drivers than their Formula One equivalents, as the GP2 sessions tend to be held in the morning, when the track is at its dirtiest and the surface has not had a chance to clean. The asphalt itself is medium abrasive, with traction and braking proving to be the most critical areas. Since its opening in 2004, the Bahrain International Circuit has played a crucial role in helping to increase the popularity of single-seater championships in the region. Aiming to become the ‘home of motorsport in the Middle East’, its 5.441 kilometre layout presents drivers with an exceptional challenge. Featuring 15 turns, four straights, a change in elevation of 18 metres and a variation in width from 14 to 22 metres, overtaking opportunities and closely-fought races are always on the cards. Pirelli’s racing manager Mario Isola commented: “The GP2 Series is of vital importance as it is supplying the next generation of Formula One stars. Our GP2 team travelled out to Bahrain for the race that was scheduled last year, so although the race did not go ahead we still have some data on the track – using the information we gained from Formula One testing as well – that will be very useful. With the high temperatures and significant lateral loads that are common in Bahrain, the tyres will definitely have that their work cut out this weekend. So it will be down to the drivers to look after them as best as they can, as they have the same basic characteristics as the Formula One tyres, with deliberate degradation and a performance drop-off beyond a certain number of laps.” Practice and qualifying in Bahrain will take place on Friday 20 April, at 11:55 and 15:55 respectively (GMT+4 hours). Race one will be held on Saturday 21 April at 15:40, followed by race two on Sunday 22 April at 10:35 (GMT+4 hours). During the first race there is an obligatory pit stop during which at least two tyres have to be changed, but there are no pit stops during the shorter race two, which is also known as the ‘sprint race’. 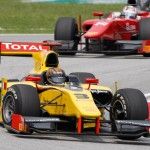