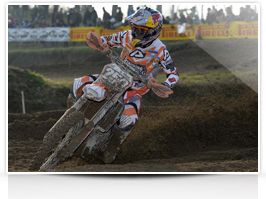 The 30th edition of the Starcross crowns Strijbos (MX1) and Coldenhoff (MX2) both on Pirelli’s tyres A month before the start of the World championship, the seasonal motocross debut has bring to the fore the Pirelli Scorpion MX which on the sandy Starcross circuit put on evidence the winning asset of the front MidSoft 32F and rear MidSoft 32 Mud pair. Absolute protagonist of the MX1 class was the Suzuki’s new entry Kevin Strijbos, who after studying his opponents in the qualifying race that saw him finishing third behind his team mate Clement Desalle, in the official competition imposed himself with determination in all three motos perfectly making the most of his Pirelli tyres, with the ideal design for the soft ground of this track. Satisfying result from Glenn Coldenhoff, as well. The Dutchman with his KTM Standing Construct equipped with Scorpion MX, was awarded the overall victory in MX2 class; outstanding performance with Pirelli colors for Desalle, 7th overall even if he didn’t finish the third moto because of a spectacular crash.