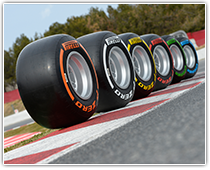 Enhanced performance, more overtaking and exciting races with at least two pit stops for each car are the goals that Pirelli wants to achieve in 2015 with its new FORMULA 1 tyre range. 2015 marks the fifth year in a row for the Italian company in the sport. The racing slicks have been redesigned compared to 2014 in order to meet the needs of the new FORMULA 1 vehicles.  The 2015 cars can, in fact, be up to two second per lap faster than the previous year, thanks to the latest hybrid power unit, ensuring higher average speeds. Pirelli has provided a new rear tyre construction across the P Zero™ range, designed to better distribute heat and forces. The footprint pressure and the temperature distribution have also been optimized, improving grip and handling, and are one of the key evolutions on all tyres this year. 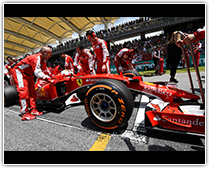 A new Supersoft compound has also been created to prevent blistering and graining. This development process, carried out throughout the off-season, underlines once more Pirelli’s constant commitment to evolution and improvement, that the company has always shown since it entered FORMULA 1 in 2011. Data analysis of the Australia Grand Prix has proved that the cars have been up to two second per lap faster compared to 2014, a trend that is likely to continue throughout the racing season.