The new 17 inch Pirelli Diablo Superbike tyres did not disappoint expectations in the first round of the season, allowing the riders to significantly increase their lap times compared to 2012. 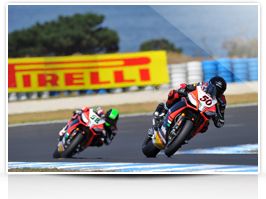 The new tyres confirm their performance during the winter tests, letting riders improve their lap times by more than one second for each lap of the race compared to last season The 2013 eni FIM World Superbike Championship opened up with the new 17 inch Pirelli tyres that had riders putting significantly better times on the boards compared to last year. The Aprilia riders proved to be able to adapt best to the new tyres right from the start and they also managed to find the best set-up in order to take advantage of the solutions Pirelli brought to the Australian round, as the two race results demonstrate. Aprilia Racing Team riders Eugene Laverty and Sylvain Guintoli took turns standing on the first and second step of the podium, followed by an excellent Michel Fabrizio (Red Devils Roma) also astride an Aprilia RSV4 Factory (3rd in Race 1 and 4th in Race 2) as well as the rider from Ravenna, Marco Melandri, on his BMW Motorrad GoldBet SBK BMW S1000. But besides the riders, the undisputed stars of the weekend were the Pirelli tyres, called upon to tackle a circuit which was definitely not easy and that was full of unknowns, not the least of which was the new asphalt where no tests could be done in the months leading up to the race. In any case, the results obtained by the new 17 inch tyres were particularly encouraging and give high hopes for the 2013 season. In fact, practically all the riders improved their lap times by more than one second each race lap compared to last season and this is a sign of how the new 17 inch tyres are able to provide decidedly better performance compared to their 16.5 inch predecessors. 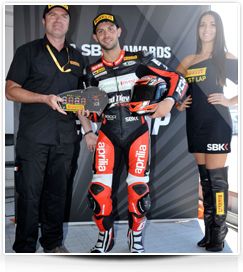 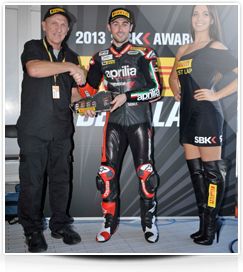 The Pirelli solutions chosen by the riders: Pirelli developed various Superbike and Supersport solutions for the first round of the season, knowing that in any case there would be a lot of unknowns. In fact, the Phillip Island track has always been one of the most extreme and aggressive on the tyres because of its particular layout of almost all left-handers, one of which is a quite fast one. These turns put significant stress on the left side of the tyres. On top of that, the races are held here duing a time of year when temperatures are particularly high and this year the track was completely resurfaced during the month of December although, for logistical reasons, Pirelli had to send all the tyres by sea already in the month of November 2012 without the benefit of knowing what the conditions would be. The teams also had no idea what to expect as they had never tested the characteristics of the new asphalt prior to this week. Despite these difficulties, the solutions Pirelli brought not only allowed the riders to race, but also to provide (as they do every year) an exciting show for the more than 60,000 race fans who always turn up on the island to watch this important motoring event. There were two solutions in Superbike which proved to be winning ones and were the most popular among all the riders in both race 1 and race 2. On the rear it was the SC1 R1299, a development solution with a medium hardness compound and internal materials which were particularly intended to keep the tyre's operating temperature lower in anticipation of overheating. For the front, on the other hand, most of the riders opted for the SC2 R982, a medium hardness blend which is excellent for high external temperatures because it ensures the solidity of the tread band. This is the solution usually favoured by more aggressive riders who prefer a compact tread band. 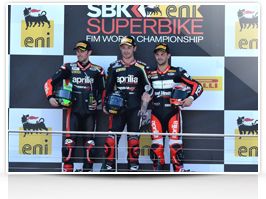 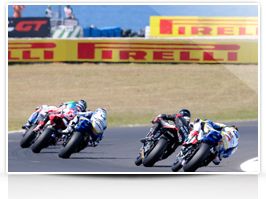 In Supersport, because of the weather conditions and the very abrasive asphalt, the race was reduced to 15 laps in order to guarantee that all the teams would be able to finish, as was indeed the case. On this note, we should point out that, unlike in Superbike where the riders use slicks, in the Supersport class grooved tyres (the Diablo Supercorsa) very similar to the street version are used. In fact, the race replica version of this tyre can normally be used on the road as well. In spite of this, performance in this case was also quite high and sufficiently consistent, as was demonstrated by the fast lap that Kenan Sofuoglu (MAHI Racing Team India) set in the last lap. Pirelli Best Lap Award: The “Pirelli Best Lap Award” is awarded by Pirelli to the rider who sets the fastest race lap. This recognition is presented by a Pirelli representative during the Paddock Show in a press conference which follows the podium at the end of races 1 and 2 for the Superbike class and at the end of the Supersport race, for a total of three awards each weekend. The time set by the fastest rider is indicated and can be seen in the trophy which is in the shape of a motorcycle instrument panel this year. The Superbike and Supersport rider who has earned the most “Pirelli Best Lap Award” titles at the end of the season will be elected “Best Lap Winner: fastest rider of the year” and awarded in the usual end of year ceremony. The riders who won the Pirelli Best Lap Award in the first round of the season at Phillip Island are: 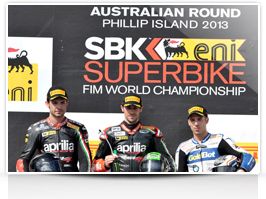 SBK Race 1 – Michel Fabrizio (Red Devils Roma), 1'31.323 (7th lap) SBK Race 2 – Eugene Laverty (Aprilia Racing Team), 1'31.168 (20th lap) WSS – Kenan Sofuoglu (MAHI Racing Team India), 1'33.283 (15th lap) Comment from Giorgio Barbier, Pirelli Moto Racing Director: “We knew that the season début would be full of unknowns and that it might hold some surprises. The Australian track per se has always been very demanding on tyres because of its layout and the high temperatures. Tracks like this, with fast turns that need to be taken leaned over and with the throttle wide open, are becoming less common in Europe and they have often been replaced by chicanes to favour rider safety. The new asphalt certainly didn't make our work any easier because we had to send the solutions for this round in November of last year, before the track was even resurfaced, so we had to design the tyres based on information from past years and considering how they might perform on the new track surface. Despite these difficulties, we are quite satisfied with the race weekend. We placed all the riders in conditions to be able to compete in the races and at that point the ones who managed to get their bikes set up the best earned their places at the front. In this round race strategy and the rider's ability to take care of the tyres were definitely key factors. Besides the peculiarities of this track, we are quite happy about the times that almost all the riders were able to achieve with the new tyres, with significant increases in lap times”. 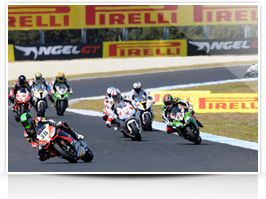 The new 17 inch Pirelli Diablo Superbike tyres did not disappoint expectations in the first round of the season, allowing the riders to significantly increase their lap times compared to 2012.
Newsroom