The flagship of the Schiranna manufacturer in the basic, R and RR version, will come equipped with the new Diablo Supercorsa SP tyres with 120/70 ZR17 on the front and 200/55 ZR17 on the rear The new Pirelli Diablo Supercorsa SP tyres have been chosen by MV Agusta as original equipment on the basic, R and RR versions of the 2013 F4 range. The fireball from Varese will use the new racing street tyres from the brand with the long "P" putting 120/70 ZR17 on the front and 200/55 ZR17 on the rear. This choice once again confirms the strong partnership between Pirelli and the historic and renowned motorcycle brand - two "Made in Italy" organisations which are appreciated across the world. Diablo Supercorsa SP (Sport Production) is the race replica version of the tyre in the SC mix (Special Compound) which will be used by World Supersport, Superstock 1000 FIM Cup and UEM European Championship riders in 2013. Diablo Supercorsa SP is a concentration of technology taken from the experience and racing heritage acquired by Pirelli in its role as sole supplier of the Superbike World Championship since 2004 and is a tyre for street use which offers performance typical of racing products for exclusive use on track, giving ultra-high performance that can be used on the street or the track without the need to compromise. Also due to its outstanding performances the new Diablo Supercorsa has already been selected as first equipment by the most prestigious motorcycles companies for their top supersport models. The Diablo Supercorsa SP have new profiles on the front and rear which, compared to the 190/55 version, for example, is taller with about 2 mm more cord and about 4 mm more central diameter for greater support during braking and to make riding more intuitive and holding the line more precise. In particular, the new 200/55 rear tyre has been completely redesigned and developed to increase the contact area and have more grip while leaning. The harmony of the front and rear profiles therefore ensures greater handling and agility. The rear 200/55 size of the Diablo Supercorsa SP implements a bi-compound solution in order to permit both increased mileage and more grip while leaning. EPT (Enhanced Patch Technology) has also made it possible to use 23% more soft compound in the shoulder area (compared to the previous Diablo Supercorsa SP version) which now accounts for the 33% of the pattern extension on each side, guaranteeing better grip in mid to full lean. Finally, new polymers used for the SP compound helps achieving an earlier warp-up and improved grip in all conditions. The performance of the compounds is further enhanced by the new and aggressive single element tread pattern, which revolves six times on the tyre surface. The result is that the “naked” area of the slick shoulders is 24% wider compared to the previous Diablo Supercorsa, increasing contact area and grip. The long longitudinal grooves, expanding from the central area to the shoulder, improve wear regularity especially under severe usage and helps draining the water lying on the ground. 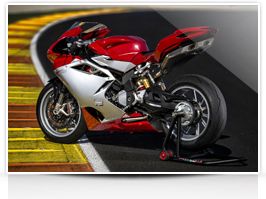 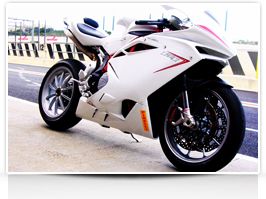 The solutions adopted for the compound (soft compound area 23% larger) and the tread (greater extension of the slick area on the shoulders) guarantee a significant increase in grip and traction, allowing the motorcycle to maintain a higher speed during leans. However, this made it necessary to use a new structure, derived directly from the ones used in competition and able to provide greater resistance to deformation. This is why the Diablo Supercorsa SP rear tyre now has a carcass made from an innovative high module fibre, patented by Pirelli and developed in WSBK, with a considerably lower deformation ratio than the fibre normally used in street tyres. The result is a new carcass which is more rigid, both at the centre and in the shoulder area. This provides greater resistance to the stress created by aggressive cornering or when accelerating early out of turns with the bike still in a leaning position. The new carcass helps the bike achieve better performance each time the weight shifts from the front to the rear and vice versa, a characteristic which is even more evident as the lean angle increases. And last, but not least, Diablo Supercorsa SP lets you personalise your tyre with special rubber labels that can be applied to dedicated spaces on the front and rear sidewalls. Each rider can create a completely customized label for these spots on the Pirelli web site and have them delivered directly to their door.