Thanks to pleasant temperature and the progress made by the Milan based tyre manufacturer, on the English circuit all the Superbike riders successfully used the standard SC0 on the rear, confirming the forecast for the weekend and the performance demonstrated at Monza 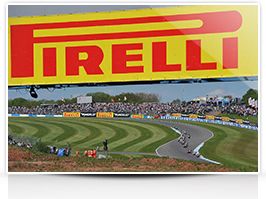 As predicted in the days leading up to the race weekend, the new 17 inch Diablo Superbike tyre in SC0 compound, the softest in the range, was the star tyre of the English Superbike races. Donington was almost a début for the standard SC0 compound which, until now, had only been brought to Monza this year, but in a development version with the central section of the tyre in reinforced compound. On the other hand, the Superbike riders on the starting grid opted for the standard product for the track in the Western Midlands, in other words, the version that is available for purchase on the market by any biker from local tyre distributors everywhere. As for the results of the eni FIM World Superbike Championship round five, the brilliant double win scored by Tom Sykes had the English and Japanese national anthems being played during both podium ceremonies. Coming in behind the Kawasaki Racing Team Englishman were Marco Melandri on his BMW and Sylvain Guintoli on his Aprilia in Race 1, who also took second place in Race 2 in front of team mate Eugene Laverty, third across the finish line. The rider from Ravenna had to settle for a fifth place finish instead in the second race of the day after running straight on in the last lap. This means that the French Aprilia Racing Team rider has managed to hold onto his lead in the overall standings with 173 points, trailed closely by Sykes, only 4 points behind at 169 points. With 149 and 127 points respectively, Eugene Laverty and Marco Melandri remain solidly in the game for the title of World Champion. At Donington Pirelli once again confirmed the excellent progress made from the beginning of the season with the new 17 inch Diablo Superbike tyres. Tom Sykes lowered his Superpole time from last year, stopping the clock at 1’27.378, a time which was actually put on the boards during the second lap, proving the excellent performance also guaranteed by the super soft qualifying tyre. But the true revelation of the weekend was the new soft compound standard tyre for the rear: despite the fact that the temperatures, although pleasant, were in any case at the limits for using an SC0 tyre, it performed quite well, allowing the riders to use the tyre with the best performance in terms of grip of those available without it showing signs of deterioration or problems due to the low temperatures. Not only this, but the new SC0 (R1261) also showed an improvement in Race 2 by almost a second per lap compared to last year's times. 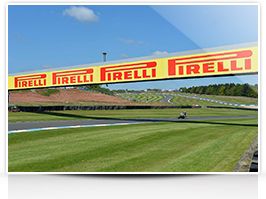 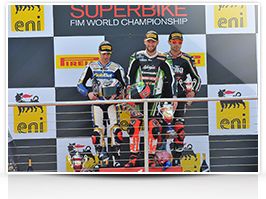 In Supersport Sam Lowes on his team Yakhnich Motorsport Yamaha, winning here at Donington as well, took his third victory in a row this year, moving to 95 points, followed by the MAHI Racing Team India team mates Kenan Sofuoglu, second across the finish line today, and Fabien Foret, ninth today. The performance put in by Roberto Rolfo is worth a mention, riding his team ParkinGo MV Agusta Corse MV Agusta F3 to the podium for the first time. The Pirelli solutions chosen by the riders: All the Superbike riders on the starting grid opted for the new standard SC0 rear tyre (R1261), which reconfirms the excellent quality of this tyre, already glimpsed at Monza. In particular, the risk of using a soft compound at Donington stemmed not so much from the asphalt or the layout of the track as from the temperatures which were not exactly suitable because they were too cool. Thanks to the work done by the Pirelli engineers, now the Superbike riders have a soft compound available to them with a wider range of use compared to what they had in the past. This tyre is also able to perform not just with high temperatures, but also with lower temperatures where, until last year, the intermediate SC1 solution would have been the only choice. For the front the riders were almost equally divided between the standard SC1 solution (R426) and the SC1 development solution (S41), the latter being chosen by all the riders on the front row of the grid. In the Supersport class the R1442, a new development solution that falls midway between the SC0 and the SC1 in terms of compound hardness, providing mileage similar to that of the SC1 but with greater grip, as well as being better protected against the cold than the SC0, was chosen by almost all the riders for the rear. Pirelli Best Lap Award: The awards that the tyre company presents to the riders who have put in the fastest lap in Superbike race 1 and race 2 and in the Supersport race at Donington were all won by riders from the United Kingdom: Jonathan Rea, Tom Sykes and Sam Lowes. The winning riders in Superbike accepted the reward from Racing Director Giorgio Barbier in the Paddock Show during the press conference at the end of race 1 and race 2 for the Superbike class. The Superbike and Supersport rider who has earned the most “Pirelli Best Lap Award” titles at the end of the season will be elected “Best Lap Winner: fastest rider of the year” and awarded in the usual end of year ceremony. At the moment the Superbike rankings are led by Tom Sykes with 4 fastest laps and Supersport is led by Sam Lowes with 2. 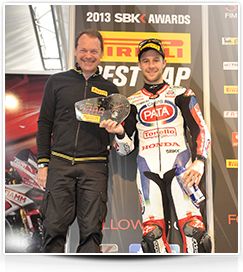 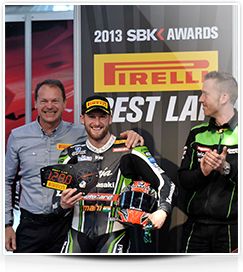 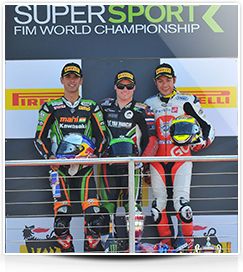 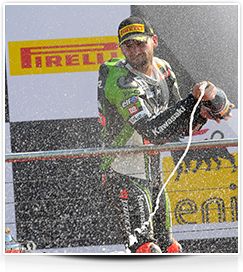 The overall standings after the first five rounds are as follows: WSB: Tom Sykes (Kawasaki Racing Team): 4; Eugene Laverty (Aprilia Racing Team): 2; Michel Fabrizio (Red Devils Roma): 1; Chaz Davies (BMW Motorrad GoldBet SBK): 1; Marco Melandri (BMW Motorrad GoldBet SBK): 1; Jonathan Rea (Pata Honda World Superbike) : 1 WSS: Sam Lowes (Yakhnich Motorsport): 2; Kenan Sofuoglu (MAHI Racing Team India): 1; Fabien Foret (MAHI Racing Team India): 1; Lorenzo Zanetti (Pata Honda World Supersport): 1 Comment from Giorgio Barbier, Pirelli Moto Racing Director: “I must confess that we are particularly pleased and a bit surprised by the excellent performance the new soft tyre demonstrated. As everyone knows, there are 3 solutions in our range: an SC0, an SC1 and an SC2, the use of which is closely, but not exclusively, tied to the asphalt temperature. The SC0, the softest, is generally suitable in cases of high temperature, the harder SC2 in cases of low temperatures and the SC1 is the midway solution. Every tyre manufacturer's dream is to obtain a tyre capable of performing the same way in any temperatures, but this is particularly difficult to achieve, at least in the immediate future. However, we have made significant improvements in this area, notably widening the range of use both of the SC0 and SC1 solutions. If it would have been unthinkable to use a soft compound like the SC0 in the temperatures at Donington without problems last year, this year the same compound is able to perform even at cooler temperatures. The work done on the SC1 compound was similar, now often able to substitute for the SC2 when the temperatures are particularly cool without suffering from cold tearing. Leaving the technical issues to the side, I would like to extend my compliments to Tom Sykes who put in his first double win, and to the entire Kawasaki team for the excellent work they did this weekend, as well as to Sam Lowes and Roberto Rolfo who rode the MV Agusta to the podium for the first time. I would also like to wish all the best to Carlos Checa who was unable to ride in Race 2 because of pain in his shoulder. We hope to see him back in form and competing soon!” 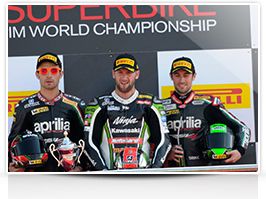 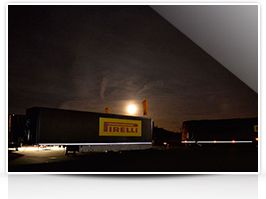