Back at the Spanish circuit, which in 1990 hosted for the first and only time the production based championship. This year it will decide the world title in the Superbike class, and the Italian tyre company provides riders with solutions in soft and medium compounds 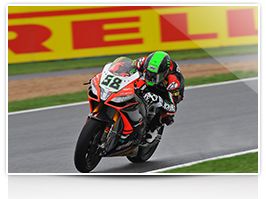 For Pirelli and the eni FIM Superbike World Championship paddock this is not the very first time at Jerez. The Spanish circuit has in fact already hosted, although only on one occasion, the production based championship, way back in 1990. For the final stage of the 2013 season, which will decide the destiny of the championship, Pirelli will provide riders with rear tyres in soft SC0 and medium SC1 compounds, including the popular standard SC0 that both designers and riders have been very satisfied with. As already happened in the past year, and on many occasions in recent years, the eni FIM Superbike World Championship will be decided at the last round. Last year Max Biaggi on the Aprilia managed to become World Champion by only 0.5 points ahead of Tom Sykes. The Kawasaki British rider has now the opportunity to take revenge  with 37 points advantage ahead of Eugene Laverty and 38 on Sylvain Guintoli. For Sykes, a fourth place in one of the two races is enough to see him crowned champion, this in case Eugene Laverty had to win both . As for the Manufacturer Championship, Aprilia leads the overall standings with 500 points followed by Kawasaki at 465, the last round will be crucial to decide who will win the Manufacturer Championship, as well as for Kawasaki will be critical the contribution of the second rider in the race for the title. While the FIM Supersport World Championship and the Superstock 1000 FIM Cup already have their winners, respectively Sam Lowes (Yakhnich Motorsport) and Sylvain Barrier (BMW Motorrad GoldBet STK), in the minor classes as the FIM Superstock 600 European Championship and the European Junior Cup is still yet to be determined. In the Superstock 600, an all-Italian battle among Franco Morbidelli (San Carlo Team Italia) who leads the standings with a 10 point advantage on Christian Gamarino (Team Goeleven) and 14 on his teammate Alessandro Nocco (San Carlo Team Italia). In the European Junior Cup, the championship dedicated to the young talents of motorcycling, the New Zealander Jake Lewis has a lead of 4 points on the pursuer, French Robin Anne, and 5 on the Spanish Augusto Fernandez. Hungarian rider Peter Sebestyen, the French Gullaume Raymond and all the riders up to ninth position in the standings can still mathematically win the championship. The circuit of Jerez de la Frontera is located in Andalusia, in southern Spain, close to Cadiz and was opened on 8 December 1985. Initially, the track measured 4218 meters then over the years, thanks to some changes that involved, among other things, the Curve Sito Pons and the addition of Senna Chicane, was made ​​longer and faster. Over the past ten years first the pit lane (which now ends at the curve Expo '92) has been lengthened and were then paved the escape routes of some curves to make the circuit safer. The track was paved for the last time in 2005. For many riders Jerez, as well as Assen, is considered a reference circuit because it presents a series of low, medium and fast speed technically ideal to develop the bike, which is why it is often chosen by the team to make their own private tests. Jerez from a tyre point of view: The Jerez circuit is 4423 meters long, 3038 meters of these are the sum of the length of the straights, which is around 69 % of the entire track, while those of the curves is 1385 meters, amounting to about 31% of the entire track length. The start-finish straight measures 600 meters with a width of 12 meters, while in the rest of the track is 11 meters. In total thirteen curves, five left and eight to the right with a corners radius that varies from the 30 meters of the curve 2, 6 and 13 to the 116 meters of the curve 4. 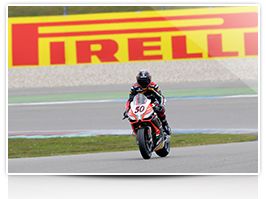 The maximum slope is 5.1 % on the main straight while the maximum gradient is 5% at the exit of curve 5. The maximum bank is recorded at the exit of the curves 2, 6 and 13 and is equal to 7.46% and the minimum is 4.70% on the curves 4 and 12. The rider who starts from the pole position will place his motorcycle on the right side of the track. The curves of this track are very different, in a complete lap are recorded on the rear tyres levels of stress fairly balanced between the right and left side. Although the lateral loads generated during the race are not very high, in order to meet the different needs of the track (fast sections alternating with slow corners, some of these elevated) a rear tyre with a good balance of handling and support in the lean is needed. The great versatility of use of rear standard Pirelli tyres is capable of responding comprehensively to the demands of this circuit. The only unknown remains the temperature, but with the SC1 for cool temperatures and the SC0 in case of warmer ones, Pirelli will be able to cover even the weather variable. But we must note that the type of asphalt used to cover the track of Jerez has a quite aggressive grainy, a factor not to be underestimated because it may lead to problems of uneven wear or abrasion on the rear tyre (especially with the use of soft compounds). Specifically, being a circuit that requires a good level of grip at the rear, it was decided to pull over to the standard products SC1 and SC0 two corresponding solutions with similar grip but more protected from cutting and tearing mechanical stress. From the front point of view, the hops due to the undulations of the asphalt in addition to requiring a manageable and stable in braking motorcycle, will require tyres able to absorb the roughness of the asphalt and properly orientate in the faster corners. Two soft solutions (the SC1 and a slightly stiffer alternative) will be brought to allow riders to find their perfect balance without sacrificing performance. Jerez from a technical point of view: "At Jerez the Superbike World Championship has stopped only once, back in 1990, and then there was never over," said Pirelli Moto Racing Director Giorgio Barbier "For this reason, the data in our possession regarding the behavior of the tyres are not many but still we have some information since the circuit is often destination of private tests for the teams during the winter because of the strategic location in southern Europe. It's a tough track but the asphalt is not particularly abrasive, although when the temperatures are rising too much, especially in summer, it tends to become slippery. In the period we race the only drawback could be caused by a light morning fog because the circuit, a bit like the one of Laguna Seca, is not very far from the sea but at the same time it is also close to a desert and slightly hilly area. The consequence of this could be a temperature swing between the early hours of the morning and the afternoon, which is why we have also brought a SC0 development more protected to prevent any possibility of cold tearing. This is not a particularly fast track but very technical and selective, I'm sure the riders will appreciate it very much and we will see some good races and a grand finale worthy of this great championship". Pirelli solutions for the Superbike and Supersport classes: For the last round of 2013 eni FIM Superbike World Championship Pirelli brought to Jerez de la Frontera a total of 4469 tyres of which 1574 reserved for the Superbike riders, 1700 for the Supersport, 448 for Superstock 1000 and 525 for those of Superstock 600, in addition to the 222 expected for the European Junior Cup. 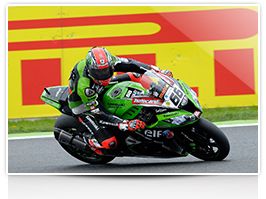 Each Superbike rider will have 32 front and 40 rear tyres, for Supersport riders this number will be of 23 for the front and 27 for the rear. For teams and riders of the Superbike class slick solutions will be 3 for the front and 4 for the rear, in addition to the rear qualifier tyre in quantity of 2 for each rider as well as the intermediate solutions, 3 for the front and the same number for the rear, and the rain tyres, in quantities of 8 both for the front and for the rear. On the front the SC1, in soft compound ideal for low external temperatures and/or circuits on average stringent, and the SC2, ideal for high ambient temperatures because it provides resistance to tread, both in the range and brought to all rounds this year. As an alternative to the two standard solutions there will be a development SC1 solution, the S283, which debuted at the Nürburgring and at Magny-Cours has been used by about half of the riders lined up on the grid. The latter solution offers greater robustness than the standard SC1. At the rear two SC0 and two SC1. The softest solution of the range debuted at Monza with the reinforced central area and has been used at Donington, Portimão, Imola, Nürburgring, Laguna Seca and Magny-Cours with success. This slick solution has a soft compound, ideal for tackling smooth asphalt and high temperatures even if it has demonstrated excellent performance even with track temperatures below 20 degrees. It offers, in fact, maximum tread contact on smooth asphalt and maximum traction development at high temperatures as well as higher resistance to thermal performance decay. As an alternative to the standard SC0 Pirelli will provide riders also with a new development SC0, the S1429, more robust from the mechanical point of view compared to the standard SC0 and that should avoid possible cold tearing to which the standard one may be exposed. 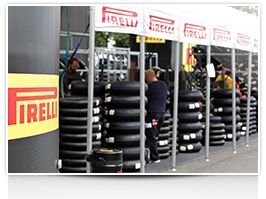 Two the SC1s, both of development: the S1258, which made its debut at Istanbul and that at the level of compound is positioned in the area of ​​standard SC1 with the purpose of improving the thermal-mechanical properties, and the R1431, brought for the first time to Imola and used by all riders at Moscow and Silverstone and brought to Nürburgring and Magny-Cours also, it should be able to provide with better resistance to laceration but same grip of standard SC1. For the Supersport two SC1 for the front and 2 SC0 and 1 SC1 at the rear. At the front the standard SC1 in soft compound already used and carried in all the races held so far in 2013 is accompanied by the development solution S14, in SC1 medium compound tested at Imola and brought to the race for the first time in Magny- Cours, was designed as an alternative of the SC1 range using a different building process. At the rear there are two development SC0 in soft compound: the S510 ideal in the case of higher temperatures and already used in Monza, Portimão, Imola and Magny-Cours, and the S1388, a totally new solution that results from Imola tests of which it is a further development. Finally, if the temperatures were more rigid, riders can count on the SC1 R1591, which debuted at Silverstone and has also been taken at the Nürburgring, should offer more resistance to tearing but equal grip than the standard SC1. As seen in many races this year the SC0 undoubtedly remains the preferred option by the riders of both classes if weather conditions allow to use it.