The rear Pirelli DIABLO™ Superbike standard SC0 tyre was the star at Donington Park; Kawasaki triumph with a Sykes-Rea one-two in both races

The eni FIM World Superbike Championship English weekend confirmed the positive trend for Kawasaki in all the factory derivative categories of the Championship. Thanks to a double win by Tom Sykes in Superbike and Kenan Sofuoglu's success in Supersport, the manufacturer from Akashi finished out the day painting the grey skies Kawasaki green over Donington Park. 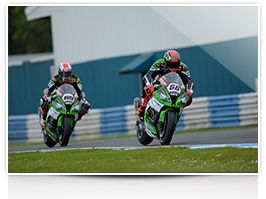 The rear Pirelli DIABLO™ Superbike tyre in standard SC0 soft compound demonstrated excellent performance: despite the less than ideal asphalt temperatures and in line with this tyre's range of use, this solution not only provided excellent performance but it let the Kawasaki riders break all the race lap speed records. In Race 1 Leon Haslam (Aprilia Racing Team - Red Devils) got off the line well, overtaking pole man Tom Sykes (Kawasaki Racing Team) just after the start. Behind them were the other Kawasaki rider, Jonathan Rea, and Davide Giugliano (Aruba.it Racing-Ducati SBK Team), both having started from the front row. At the start of the second lap the current Championship leader overtook team mate Sykes and Leon Haslam, moving into the lead. In the meantime Chaz Davies (Aruba.it Racing-Ducati SBK Team) also overtook his team mate to move into fourth place. During the fourth lap Tom Sykes overtook Leon Haslam for second place and in the meantime a compact lead pack was formed, made up of Rea, Sykes, Haslam and Davies. 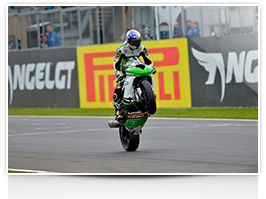 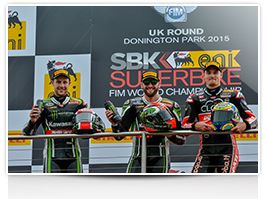 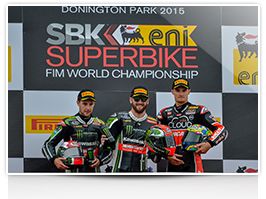 The Superbike and Supersport rider who has earned the most “Pirelli Best Lap Awards” will be elected “Best Lap Winner: fastest rider of the year” and will be awarded during the ceremony at the end of the year. Jonathan Rea is leading the Superbike standings with 5 Best Laps won, Jules Cluzel the Supersport with 4 Best Laps. These are the riders who won the Pirelli Best Lap Awards at Donington Park: WSB Race 1 – Jonathan Rea (Kawasaki Racing Team), 1'27.914 (9th lap) WSB Race 2 – Tom Sykes (Kawasaki Racing Team), 1'27.640 (2nd lap) WSS – Jules Cluzel (MV Agusta Reparto Corse), 1'30.425 (14th lap) 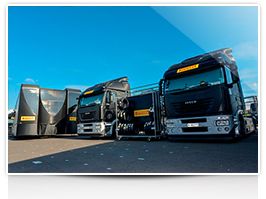 The rear Pirelli DIABLO™ Superbike standard SC0 tyre was the star at Donington Park; Kawasaki triumph with a Sykes-Rea one-two in both races
Newsroom