Tom Sykes on Kawasaki and Eugene Laverty on Aprilia win at Assen with the Pirelli standard SC1 rear tyre and with the R1688, an alternative development solution of the standard SC1

On a weekend characterised by particularly cold temperatures, the SC1 compound tyres confirm that they are more and more versatile in terms of use for both the Superbike and Supersport classes as well as further improving lap times with respect to previous years 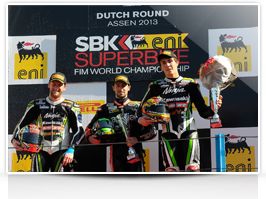 This weekend was marked by the green Kawasaki and Tom Sykes, winner of both Superpole on Saturday and Race 1 as well as the respective Pirelli Best Lap Award today, but also by Eugene Laverty on his Aprilia who did quite well, riding to the top step of the podium and taking the Pirelli Best Lap Award in Race 2. The Pirelli tyres also played a key role because once again they contributed to making the race weekend exciting in all the eni FIM World Superbike Championship classes. In particular, the SC1 compound solutions increasingly win over the Superbike riders, but also the Supersport riders, as well as lowering lap times compared to previous years. Using 2011 as a point of reference (in 2011 the Superbike races were held in the wet), the new 17 inch Diablo Superbike tyres allowed the riders to lower their lap times by more than half a second, confirming the positive trend begun in the first two rounds of the season. In particular, the rear SC1 R1688 development solution that was used for the first time here at Assen demonstrated excellent qualities of adaptability to all of the bikes, but it especially showed the ability, even more than the standard SC1, to work at low temperatures, a quality which has historically been held only by the SC2. This is all clearly to the advantage of the riders who were able to count on an excellent grip typical of an SC1 compound, but at the same time on protection against low temperatures and cold tearing of harder blends like the SC2. 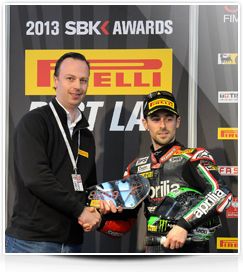 In Supersport it was Sam Lowes on the top step of the podium, with his Yakhnich Motorsport team Yamaha beating out the Kawasakis from the MAHI Racing Team India ridden by Kenan Sofuoglu and Fabien Foret. In this class the Diablo Supercorsa SC in standard SC1 compound both on the front and the rear were also quite popular with the riders. In Superstock 1000 victory went to Eddi La Marra (Barni Racing Team) and in Superstock 600 there was a second consecutive podium for Gauthier Duwelz (MTM-MVR Racing Team) in races which were battled out down to the last turn, taking full advantage of the Diablo Supercorsa SC tyres. The Pirelli solutions chosen by the riders: The SC1 compound solutions proved once again to be quite popular with the Superbike and Supersport class riders. For the third round of the World Superbike Championship Pirelli once again provided the riders in both classes with various solutions including the standard SC1 and SC2 blends as well as few new development solutions. In Superbike the R1688 SC1 development solution on the rear was the star of the weekend: chosen by 15 riders out of the 18 on the starting grid in race 1 and by half the riders in race 2, it was particularly popular for the good level of grip it was able to provide despite the cold temperatures (15° and 23° asphalt temps) and for its stability, managing to outdo the standard SC2 blend which would otherwise have been the most popular solution with the low temperatures. In race 2 a few riders like Eugene Laverty (Aprilia Racing Team) opting for the standard SC1 compound, partly due to the rising temperature, which was able to provide better grip. This strategy rewarded the Irish rider, allowing him to take the top step of the podium. In fact, those who did not use the SC1 R1688 opted for the standard SC1 (R828) which, as in the past, performed superbly adapting to the extremely varying temperatures. On the front the Superbike riders more or less all chose the standard and the development (S41) SC1, confirming what was stated above for the rear. The Supersport starting grid did not differ much from the Superbike grid, with most riders opting for the standard SC1 compound both on the front (P1177) and the rear (R303). Pirelli Best Lap Award: 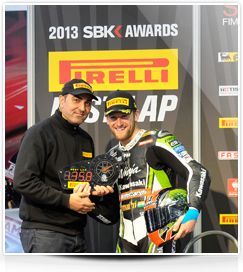 In the Cathedral of Motorcyclyng the brand with the long “P” as usual assigned the “Pirelli Best Lap Awards”, the three awards Pirelli gives to the riders who have put the fastest lap in Superbike race 1 and race 2 and in Supersport race. The winning riders received recognition, which this year is a trophy in the shape of a motorcycle dashboard which displays the best time made, presented in the paddock during the press conference following the podium ceremonies at the end of Superbike race 1 and race 2 as well as at the end of the Supersport race. The Superbike and Supersport rider who has received the most “Pirelli Best Lap Awards” at the end of the season will be named the “Best Lap Winner: fastest rider of the year” and will be awarded during the traditional end of year ceremony. Here are the Pirelli Best Lap Award winning riders at TT Circuit Assen from the second European round (third of the season): WSB Race 1 – Tom Sykes (Kawasaki Racing Team), 1'35.893 (2nd lap) WSB Race 2 – Eugene Laverty (Aprilia Racing Team), 1'36.085 (2nd lap) WSS – Fabien Foret (MAHI Racing Team India), 1'38.768 (7th lap) The overall standings after the first three rounds are as follows: WSB: Tom Sykes (Kawasaki Racing Team): 2; Eugene Laverty (Aprilia Racing Team):2; Michel Fabrizio (Red Devils Roma): 1; Chaz Davies (BMW Motorrad GoldBet SBK): 1 WSS: Kenan Sofuoglu (MAHI Racing Team India): 1; Sam Lowes (Yakhnich Motorsport): 1; Fabien Foret (MAHI Racing Team India): 1 Comment from Giorgio Barbier, Pirelli Moto Racing Director: 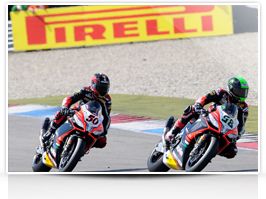 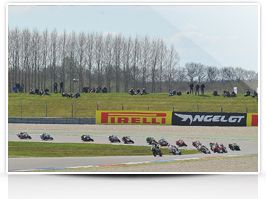 “My compliments to both Kawasaki and Aprilia for their results, but it's also a pleasure to see how heated the battle has been so far in the Superbike Championship with Sylvain Guintoli, at 111 points in the overall standings, followed by Eugene Laverty, Chaz Davies and Tom Sykes, all three tied in second place with 83 points, as a testament to how all the manufacturers have adapted to the new 17 inch tyres. The Best Lap that Tom Sykes put on the board with an extraordinary 1’35.893 was the icing on the cake for the weekend! I think we can be quite satisfied with this weekend. As regards the Superbike classes the solutions we brought, particularly the R1688 SC1 development solution for the rear, performed very well. It is still early to fully promote the R1688 because it only just made its début on this track and we still haven't seen how it might perform in higher temperatures, but if what we have seen the last few days is any indication, we can say that it will certainly be provided at other circuits during the year so that we'll have more data in order to assess it. In particular it was popular with the riders who chose it because of its excellent qualities in terms of grip and stability, characteristics of the standard SC1, combined with a durability and protection against low temperatures which are typical of the standard SC2 blend. The S41 also did quite well on the front (the SC1 development solution) which was chosen by half the riders on the grid. For Supersport as well, just like at Aragón, the standard SC1 solution proved to be the preferred option among the riders for both the front and the rear, confirming the fact that the work we did last year to make the SC1 a more and more versatile solution able to cover an increasingly wide range of weather conditions and tracks is moving in the right direction.” The 2013 Pirelli statistics for the TT Circuit Assen round: • Total number of tyres Pirelli brought: 4848 • Number of solutions (dry, intermediate and wet) for the Superbike class: 5 front and 7 rear • Number of solutions for the Supersport class (dry, intermediate and wet): 4 front and 5 rear Number of tyres available for each Superbike rider: 34 front and 40 rear • Number of tyres available for each Supersport rider: 25 front and 29 rear • Temperature in Race 1: air 12° C, asphalt 15° C • Temperature in Race 2: air 15° C, asphalt 23° C • Maximum race speed reached by Pirelli Diablo Superbike tyres: 293.3 km/h, Eugene Laverty (Aprilia Racing Team) in Race 1 at 21st lap • Maximum race speed reached by Pirelli Diablo Supercorsa tyres in Supersport: 258,8 km/h, Michael Vd Mark (Pata Honda World Supersport), 3rd lap.

Tom Sykes on Kawasaki and Eugene Laverty on Aprilia win at Assen with the Pirelli standard SC1 rear tyre and with the R1688, an alternative development solution of the standard SC1
Newsroom