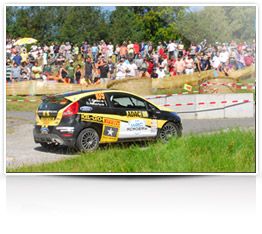 The inaugural FIA WRC Academy intake heads to the Alsace region of France this week (September 29-October 1) for the second asphalt event of the season, rated as a Tarmac rally like no other due to the inconsistent nature of the terrain and road surface. Based on the outskirts of Strasbourg, close to France’s border with Germany, the event features a wide variety of stages of differing surfaces, widths and gradients in vineyards, mountain regions and town centres. With gravel sections also featuring on the competitive route, the world rally hopefuls will be required to overcome a tough test in their Pirelli-equipped Ford Fiesta R2s. To ease the task facing the competitors, which is increased by the likelihood of inclement weather, Pirelli, the official tyre supplier of the WRC Academy, will make available 16 P Zero RX5 tyres and 12 P Zero RE7 tyres to each crew. They are permitted to use a maximum of 18 tyres once the event gets underway on Friday morning (September 30). Two spare tyres are made available for the pre-event shakedown on Thursday afternoon but cannot be used on the rally proper. The hard compound RX5 is designed for optimal performance in warm and dry conditions. Conversely, the RE7 was developed to provide improved grip in the event of rain and cold temperatures, a feature of last year’s Rallye de France. By offering crews two choices of tyre, Pirelli engineers hope to be able to provide more vital experience when the WRC Academy runners make the step up to the World Rally Championship in future, as well as teaching them about correct tyre usage. “Our involvement in the WRC Academy is part of our continuous plan to help develop the next generation of world championship stars,” said Pirelli’s motorsport director Paul Hembery. “With a level playing field created due to the fact all drivers have to use the same Ford Fiesta R2s and Pirelli control tyres, our young talents can discover just how pivotal tyre choice can be to the outcome of a rally.” Another challenge the WRC Academy runners will face in France is the problem of mud, stones and other debris being dragged onto the road by the drivers at the head of the field taking ‘cuts’ through corners. “This is always a concern,” added Hembery. “But we saw on ADAC Rallye Deutschland, where we experienced similar conditions, how well our tyres, that are of a standard construction for weight and cost benefits, performed with just four failures reported by drivers running over rocks.” Among the WRC Academy runners in action on Rallye de France Alsace are six Pirelli Star Drivers, who are competing this season through a scholarship from the FIA, motorsport’s world governing body, and the Italian tyre firm, which has underwritten the cost of season of international competition. The Pirelli Star Drivers for 2011 are Irishman Craig Breen, the winner of the previous WRC Academy event in Germany last month, Swede Fredrik Ahlin, Czech Jan Cerny, Italian Andrea Crugnola, plus Australians Brendan Reeves and Molly Taylor. Rallye de France Alsace forms round five of the six-event FIA WRC Academy Cup and features a total of 17 stages over a competitive distance of 296.77 kilometres. After claiming three straight wins, Estonian Egon Kaur heads the drivers’ standings by 26 points ahead of Pirelli Star Drivers Craig Breen and Brendan Reeves. For further information contact: Anthony Peacock +44 7765 896930 anthony@mediatica.co.uk