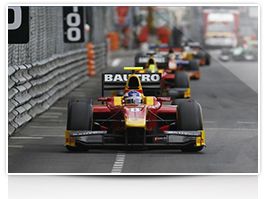 With Monaco being the slowest and most twisty track of the year, GP2 has been allocated Pirelli’s P Zero Yellow soft and P Zero Red supersoft tyres: just like Formula One. However, the GP2 tyres are designed for a completely different set of loads and vehicle dynamics over the course of a lap. One thing that doesn’t change is the characteristics of each circuit, and Monaco demands a tyre with a rapid warm-up that is capable of delivering consistent mechanical grip throughout each of the many corners. Following the opening GP2 rounds in Bahrain and Spain, Monaco is one of the few venues where the teams don’t get an opportunity to carry out a pre-event test – increasing an already complex set of variables over this unique street circuit.

Pirelli’s racing manager says: Mario Isola: “The championship has got off to a great start, and we’ve seen how the introduction of new rules obliging drivers to use both compounds during the race, just like Formula One, has led to some very creative and well-planned strategies. Monaco has a reputation for being one of the most unpredictable races of the year, but also for being very hard to overtake on: especially in GP2 where all the cars are identical. So it’s going to be interesting to see if drivers can use strategy in the feature race to gain track position and boost their prospects. Qualifying will be very important: the key to that will be seeing which drivers and teams get up to speed with the characteristics of the supersoft most quickly. This is a very fast tyre, but of course it does not last as long as the soft. We think the soft will be the main race tyre, although some drivers may choose to qualify on it and save the supersoft for the race. Drivers can use the supersoft for a good number of laps in both races if the degradation is not so high. Drivers will also have to use their allocation wisely and hope for a clear lap in the traffic, which is why qualifying is uniquely split into two sessions on Thursday.”

Wear and degradation is minimal on both compounds, as Monaco has the least rough surface of the season. Track evolution is considerable over the course of the weekend, with grip levels improving dramatically: sometimes even within one single session.

The race can be won and lost by strategy calls made during safety car periods. The tight confines of the street circuit often lead to safety cars, so a quick pit stop at exactly the right time will frequently make the difference.

Last year, the feature race was red-flagged after a first-corner pile-up that eliminated nine cars but allowed a tyre change; therefore a potential change of strategy before the re-start. Reactivity from the pit wall is vital.

The race and the rules: The biggest change compared to the usual GP2 schedule in Monaco is a unique timetable.The cars take to the track for practice and qualifying on Thursday, with qualifying split into two groups. The feature race is on Friday morning while the sprint race takes place on Saturday afternoon.

Every car will have five sets of dry tyres and three sets of wet weather tyres available for the GP2 race weekend.

The drivers can use their tyre allocation in any way they like, but at least one set of each compound must be used in the feature race (unless it is a wet race). One set of the harder compound must be returned after free practice.

Qualifying group A takes place at 16:15 on Thursday, followed by qualifying group B at 16:39. This is intended to help drivers find a clear lap. The feature race on Friday is run at 11:15 over 42 laps (140.28 kilometres) and each driver must complete one compulsory pit stop. This cannot take place within the first six laps.

The grid for the sprint race on Saturday at 16:10 is determined by the finishing order of the first race, with the top eight positions reversed. The sprint race is run over 30 laps (100.20 kilometres) with no compulsory pit stops.

Ends Copyright-free videos, photos as well as latest media news are available for editorial use from: www.pirelli.com/f1pressarea (registration required).