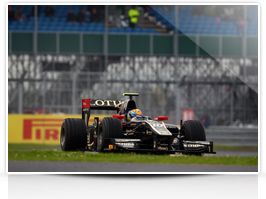 A brilliant tyre strategy allowed Carlin driver Will Buller to take a dramatic win from last place on the grid at the second GP3 race in Silverstone: round four of the series, which was run alongside round seven of the GP2 Series. On a drying circuit, Buller started from last on Sunday morning, having crashed out on the opening lap of Saturday’s race one. Although conditions were slippery at first, Buller worked his way up to the lead by lap 10, as he took advantage of the superior grip offered by the P Zero hard tyres he chose while most of his rivals started on wets. Lotus driver Conor Daly was second, also on slicks, while Patric Neiderhauser was on the podium for Jenzer, having run on wet tyres for the whole race. Adding to the variety of strategies in play, Manor driver Tio Ellinas in fourth was the first of the drivers who chose to pit for slicks during the race. Silverstone was characterised by wet weather throughout the GP2 and GP3 race weekend, which made grip levels extremely variable. Britain marked the debut of some new tyre regulations for GP2, allowing them an extra set of the softer compound slicks at each race, but the drivers did not get the chance to make the most of them because of the extreme conditions. 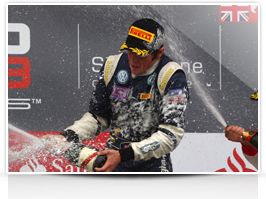 The GP2 qualifying session was interrupted by several red flags, and the first GP2 race on Saturday got underway behind the safety car. Tyre strategy was again key, with pole-sitter Fabio Leimer (Racing Engineering) not taking advantage of the safety car period to make his compulsory pit stop and subsequently losing the lead, whereas race winner Esteban Gutierrez was among the first to pit, using Pirelli’s wet pattern tyres throughout the race. The first GP3 race that followed it on Saturday was the first race of the weekend to be held in completely dry conditions, with the drivers using the hard compound tyre nominated for Britain. Carlin driver Antonio Felix da Costa claimed his second victory of the year after starting third on the grid. There was still plenty of water just off the racing line, but the Portuguese driver still found enough grip to take the lead by the end of the first lap. The GP2 drivers got their first taste of slick tyres in Sunday morning’s sprint race, with the majority of drivers selecting the P Zero White medium, which had been nominated along with the soft tyres. Although conditions were mainly dry, there was still some rain, making the battle between title rivals Luiz Razia (Arden) and Davide Valsecchi (DAMS) even more intense. Razia, who started from fourth on the grid, won the race thanks to some brilliant overtaking moves despite the challenging surface conditions. Pirelli’s racing manager Mario Isola commented: “In the mixed conditions that we saw, having the right tyre is essential, and this was proved by Buller’s brilliant drive from the back in the second GP3 race, when he was able to make the most of the slick tyres. Although the track never fully dried out over the whole weekend, our GP2 and GP3 slick tyres managed to provide grip even when it was wet – with the harder compound GP2 tyres proving particularly effective in the second race on Sunday. It was a pity that the GP2 drivers did not get the chance to make the most of the latest tyre regulations because of the weather, but under these challenging circumstances the tyre strategy becomes even more important, providing the key to victory in the first GP2 race on Saturday.” *** Copyright-free video news releases featuring interviews with Paul Hembery, as well as photographs and press releases are available for media use from: www.pirelli.com/f1pressarea. Follow us on Twitter @ Pirelli_Media or Facebook on www.facebook.com/Pirelli For further information please contact: Alexandra Schieren +33 607 03 69 03 alexandra.schieren@pirelli.com Anthony Peacock +44 7765 896 930 anthony@mediatica.co.uk *** Francescopaolo Tarallo +39 334 684 4307 francescopaolo.tarallo@pirelli.com (Head of Product and Motorsport Communications)