Victory for Jonathan Rea in WorldSBK Race 1 in Jerez; outstanding performance for all the solutions brought by Pirelli

Still not tired of victories and already crowned 2017 World Champion, Northern Irishman takes his third win of the season ahead of Chaz Davies on Ducati and teammate Tom Sykes, poor luck for Marco Melandri 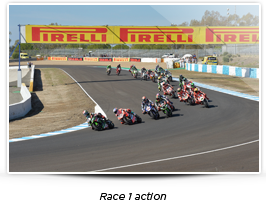 Today at the Circuito de Velocidad of Jerez de la Frontera in Spain, Jonathan Rea (Kawasaki Racing Team) won Race 1 of the MOTUL FIM World Superbike Championship, now in its penultimate round of the season. The Northern Irishman crossed the line ahead of Chaz Davies (Aruba.it Racing – Ducati) and his teammate Tom Sykes. On the other hand, it was poor luck for Marco Melandri's Ducati when, after winning Superpole®in the morning, rode an excellent race, but during the sixteenth lap was forced to retire due to a technical problem with his bike.

As for the Pirelli tyres used in the race, on the rear, basically all the riders relied on the soft solution whereas on the front, an indicator of the excellent range of options made available by Pirelli, all four solutions were used and all successfully. Just imagine that the three riders on the podium had chosen three different front solutions.

Race 1 got underway at 1:00 PM local time with Marco Melandri (Aruba.it Racing – Ducati) in pole position. As early as the first lap, the race was red flagged due to Ayrton Badovini (Grillini Racing Team) crashing, immediately followed by one by Raffaele De Rosa (Althea BMW Racing Team). The Quick Restart procedure was applied and 15 minutes later the riders were back on the grid with 19 laps to race. Jonathan Rea (Kawasaki Racing Team) got off to a good start, managing to overtake Melandri, relegating him to second place. Behind them were their respective teammates, Tom Sykes on Kawasaki and Chaz Davies on Ducati. After three laps, Davies managed to get the better of Sykes, moving into third place behind his teammate. During the seventh lap, the Ducati riding Italian made a nice move to overtake Rea and move back into the lead, then managing to progressively widen the gap between him and the Northern Irishman to almost a second and a half during the tenth lap.

Unfortunately, Marco Melandri's race came to an end in the sixteenth lap due to a technical problem that caused him to retire, leaving first place to 2017 World Champion Jonathan Rea who crossed the line first ahead of the other Ducati rider Chaz Davies, second, and his teammate Tom Sykes, third.

The Pirelli solutions chosen by the WorldSBK riders for Race 1:

In Race 1 the asphalt temperature was 39°C and that let the riders use more or less all of the solutions Pirelli had brought. In particular, all the riders except Takumi Takahashi (Red Bull Honda World Superbike Team) used the softest solution on the rear, namely the W0576 (option A), already used in the Laguna Seca and Magny-Cours rounds. As for the front, the most used tyre was the V0952 SC1 development solution (option B), but the standard SC2 (option C) and the new W0418 SC3 development tyre (option D) were also rather popular. The only rider opting for the standard SC1 (option A) was Chaz Davies (Aruba.it Racing – Ducati). Tyres selected on the starting grid of WorldSBK Race 1

• Number of solutions (dry, intermediate and wet) for the Superbike class: 6 front and 6 rear Number of tyres available for each Superbike rider: 76, including 41 front and 35 rear • Air temperature: 25° C • Asphalt temperature: 39° C

Victory for Jonathan Rea in WorldSBK Race 1 in Jerez; outstanding performance for all the solutions brought by Pirelli