Weather intervenes as Sykes wins his first of 2012 Thanks to poor weather conditions that came and went all day at Monza the first race had to be cancelled and only one SBK contest took place, which was then unavoidably shortened to half distance. On a day of uncertainties and unpredictable track conditions Tom Sykes (Kawasaki Racing Team) provided an emphatic win out of all proportion to the short eight laps the race lasted before the rains came back to spoil the party yet again. His margin of victory was 9.709 seconds, more than a second per lap faster than his main rivals in damp but drying track conditions. An overall crowd figure of 85,000 was recorded at the Autodromo Nazionale for this weekend’s event. Pirelli BEST LAP Awards: SBK Race 2 – Tom Sykes ( Kawasaki Racing Team), 1'44.707  (Lap 7) Total BEST LAP (SBK): Checa C. (Althea Racing): 3, Sykes T. (Kawasaki Racing Team): 3; Biaggi M. (Aprilia Racing Team): 1 WSS – Sam Lowes (Bogdanka PTR Honda),  2'00.653 (Lap 16) Total BEST LAP (WSS): Foret F. (Kawasaki Intermoto Step): 1; Parkes B. (Ten Kate Racing Products): 1; Lanzi L. (Prorace): 1; Lowes S. (Bogdanka PTR Honda): 1 Stk1000 – Fabio Massei (EAB Ten Kate Junior Team), 1’52.272 (Lap 10) Stk600 – Riccardo Russo (Team Italia FMI), 2'08.231 (Lap 6) Tom Sykes: “There’s been a lot of commotion today, but to get the win for Kawasaki and the ZX-10R is great for us. The bike was awesome in the race, there were a lot of damp patches, but I had such good feedback I was able to get my head down and go about business in a good way. It’s a shame the race couldn’t go two-thirds distance but, hopefully now we can move on to a very sunny England and have some consistent weather for a change!.” Leon Haslam: “I think we made the best of a bad day, 14th on the grid wasn’t ideal. It was quite difficult to overtake coming off the dry line, but it worked out perfect. We managed to get second, Tom was too quick from the get-go and by the time I got second he had already gone. A big credit to BMW, I’m happy to just get back onto the podium.” Eugene Laverty: “We’ve been strong all weekend here at Monza in these conditions but I think we’re all just relieved to get that race over. I’m happy to be on the podium, home safe and sound. When I saw Leon go in front of me because he’s very experienced, I was happy to follow him and let him lead the way because there were some damp patches. Pleased for the podium after a tough day.” 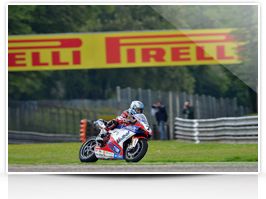 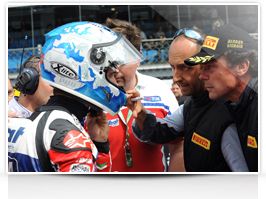 As the race was so short, but beyond the lap count that would mean a restart, only half points were awarded to all the top 15 finishers. Tissot-Superpole winner Sylvain Guintoli (Effenbert-Liberty Ducati) looked like he would be the man to challenge Sykes but his bike stalled on the final warm-up lap and he could not get back to the grid in time to make the start. Leon Haslam (BMW Motorrad Motorsport) and Eugene Laverty (Aprilia Racing Team) headed up a warring group of six potential podium riders, with Max Biaggi (Aprilia Racing Team) fifth and Carlos Checa (Althea Racing Ducati) seventh. Sykes is the fifth different race winner of the year and race victories have now been taken by Aprilia, Ducati, Honda and Kawasaki riders, after only seven individual race finishes. 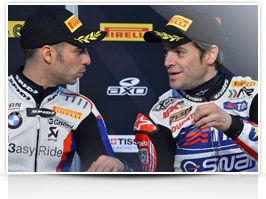 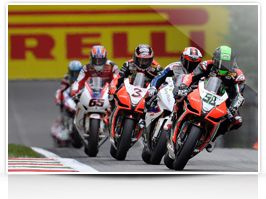 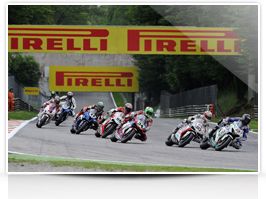 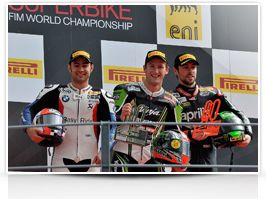 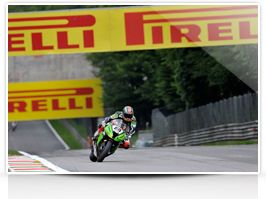 Weather intervenes as Sykes wins his first of 2012
Newsroom