With a first and second place finish Sylvain Guintoli has now closed the gap in the championship standings behind Tom Sykes to 12 points, making the last round which will be held at the beginning of November in Qatar the deciding round for the title

Leandro Mercado on his Barni Racing Team Ducati Panigale is crowned Superstock 1000 FIM Cup Champion Race Sunday at Magny-Cours was marked by foul weather for the penultimate round of the eni FIM World Superbike Championship. For the occasion the premier class riders had their first ever chance to try the new DIABLO™ Rain tyre on the rear designed by Pirelli which, for its début, proved straight away that it can provide something more in terms of performance compared to the current standard tyre. In Superpole on Saturday, held on a dry track and in sunny weather, Tom Sykes (Kawasaki Racing Team), put a lap on the boards at 1’36.366 taking pole position and breaking the track record he himself had set in 2012, improving on it by 6 tenths of a second, thanks in part to the performance of Pirelli qualifier tyres. The Englishman, however, currently leading the championship standings with 12 points from Frenchman Sylvain Guintoli (Aprilia Racing Team), was rendered powerless by the superiority the riders from the Noale manufacturer demonstrated. 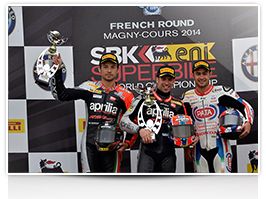 In Race 1 thanks to teamwork by the Aprilia Racing Team riders, they took their sixth one-two finish of the season. The standard bearers from the Noale-based manufacturer were strong off the starting grid and after a few laps Marco Melandri found himself leading the race from his team mate. The rider from Ravenna conceded a place, allowing Sylvain Guintoli to win the race in front of the Italian and Englishman Jonathan Rea (PATA Honda World Superbike) who finished third. Tom Sykes (Kawasaki Racing Team) was only able to take fourth, limiting damage and earning 13 championship points. In Race 2 Aprilia dominated once again, but this time Marco Melandri (Aprilia Racing Team), after taking the lead from his team mate, won the race depriving his team mate of 5 important points in the battle for the championship title. Third place went to Leon Haslam (PATA Honda World Superbike Team) who had not been on the podium for quite a few races. Leandro Mercado won the championship title in the FIM Superstock1000 European Championship. The South American on his Barni Racing Team Ducati Panigale started from the eleventh spot on the grid, whereas his fiercest competition for the title, Italian rider Lorenzo Savadori (Team Pedercini), seemed to be the favourite, starting from pole position. The Kawasaki rider crashed in the last lap and fourth place was enough to crown the Argentinian Champion. The final race in the Championship was won by Matthieu Lussiana (Team GARNIER by ASPI), with second place going to Romain Lanusse (Team Pedercini) and the bottom step of the podium for Jed Metcher (EAB Racing Team). 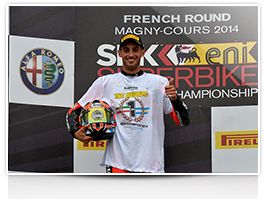 In the FIM Supersport World Championship, Michael Vd Mark (Pata Honda World Supersport Team), after being crowned World Champion with two races left to go in Jerez, took second place in France behind Jules Cluzel, MV Agusta Reparto Corse's French rider who started from pole position. Rounding out the podium in third place was Italian Roberto Rolfo (Team Go Eleven) astride his Kawasaki ZX-6R, whereas Turkish rider Kenan Sofuoglu (San Carlo Puccetti Racing) was unlucky with a crash that ended his race early despite the fact that he earned the fastest lap. The last race of the FIM Superstock600 European Championship, held Saturday on a dry track and with the championship title already having been assigned to Italian Marco Faccani (San Carlo Team Italia), saw victory taken by wild card Toprak Razgatioglu (Bike Service Racing), a young Turkish understudy of Kenan Sofuoglu who managed to win his maiden race, leaving Anthony Dumont (SL Moteur) behind him in second place and Niki Tuuli (Kallio Racing) to finish third. Newly crowned champion Marco Faccani fell victim to an unlucky crash two laps from the finish. The European Junior Cup, which is run with Honda CBR500R and Pirelli DIABLO™ Supercorsa tyres, assigned the 2014 title to the Spanish Augusto Fernandez, the 17 year old rider of the WIL SPORT team that last year was ranked second at the end of the season. Comment from Giorgio Barbier, Pirelli Moto Racing Director: “First of all, my compliments to Leandro Mercado and the Barni Racing Team for their excellent result. I would also like to mention the talented Lorenzo Savadori and Team Pedercini who, right down to the last lap, battled to win the FIM Superstock1000 European Championship title. Today's events were undoubtedly affected by the weather but Aprilia certainly proved that they have an extremely competitive bike and riders. With today's demonstration of strength the manufacturer from Noale has confirmed that they have all the necessary potential to take the battle to Kawasaki and Tom Sykes right down to the last round. Once again this year we have a very heated championship which will most likely be decided in the final race of the final round, as has already happened several times in the past. All we can do now is to wait for the beginning of November and Qatar, where we will find a very different track with respect to the one in Magny-Cours and where the riders will be facing a night race on an artificially lighted track for the first time. All the best both to Tom Sykes and Sylvain Guintoli for this final round of the season.” The Pirelli solutions chosen by the riders: In Superbike DIABLO™ Rain tyres were used. More specifically, the standard tyre was used on the front, whereas at the rear almost all the riders used the new T0905 development solution designed by Pirelli as an alternative to the standard wet tyre. In the Supersport class all the riders used the standard DIABLO™ Rain tyres. Pirelli Best Lap Awards: 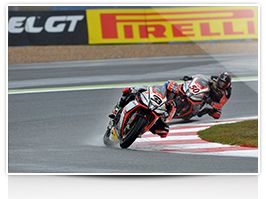