WorldSBK: A Ducati red Race 1 with a win by Chaz Davies, Pirelli pleased with the new standard SC3 solution, the most popular on the front

Asphalt temperatures higher than 30° allowed the riders to use soft solutions on the rear whereas many riders, including the race winner, went with the new DIABLO™ Superbike solution on the front 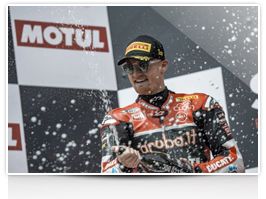 Welsh Ducati rider Chaz Davies (Aruba.it Racing – Ducati) and the new standard SC3 Pirelli DIABLO™ Superbike solution on the front, were the protagonists of the MOTUL FIM World Superbike Championship Race 1 at the Autodromo Internazionale Enzo e Dino Ferrari in Imola which hosted the first Italian round of the 2016 season in the Championship for factory derivative bikes. After bringing home a double win in the MotorLand Aragón Spanish round and finishing second in Race 1 at Assen, Chaz Davies took his third win of the season, leading for the entire race after winning pole position this morning ahead of teammate Davide Giugliano and Kawasaki Racing Team riders Jonathan Rea and Tom Sykes. On the other hand, 2014 World Champion Sylvain Guintoli's weekend finished early after a bad crash during Superpole where he suffered a hard hit to his head and was forced to withdraw so he could be taken to hospital. The Ducati Welshman got off the line straight away, whereas his teammate was overtaken at the start by Rea and Sykes on their green machines as they set off after Davies. As early as the third lap Davies demonstrated his excellent form, achieving the race best lap at 1’46.700 that also set a new track record. During the seventh lap Lorenzo Savadori (IodaRacing Team) was overtaken first by Jordi Torres (Althea BMW Racing Team) and then by Leon Camier (MV Agusta Reparto Corse) and Nicky Hayden (Honda World Superbike Team) In the ninth lap, Rea went long but was able to get back on the track without losing second place, and during the eleventh lap Michael Van der Mark (Honda World Superbike Team) also overtook Lorenzo Savadori. During the thirteenth lap Jordi Torres got the best of Davide Giugliano to move into fourth place and a lap later the Ducati rider was also temporarily overtaken by Leon Camier who, however, was unable to hold onto the position, losing it back to Giugliano a bit later. In the meantime, race leader Chaz Davies increased the gap to more than five and a half seconds ahead of Jonathan Rea following in second place. In the end the Ducati rider crossed the wire first with a 3.4 second advantage over Rea, 3.7 ahead of Sykes and more than thirteen seconds before the rest of the group. 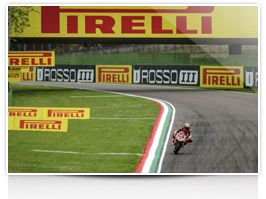 Race 1 standings: 1) Chaz Davies (Aruba.it Racing – Ducati) 2) Jonathan Rea (Kawasaki Racing Team) 3) Tom Sykes (Kawasaki Racing Team) 4) Jordi Torres (Althea BMW Racing Team) 5) Davide Giugliano (Aruba.it Racing – Ducati) 6) Leon Camier (MV Agusta Reparto Corse) 7) Michael van der Mark (Honda World Superbike Team) 8 ) Lorenzo Savadori (IodaRacing Team) 9) Nicky Hayden (Honda World Superbike Team) 10) Alex Lowes (Pata Yamaha Official WSBK Team) … The Pirelli solutions chosen by the riders for Race 1: In Race 1 basically all of the front solutions Pirelli brought were used, but the star of the day was without a doubt the new SC3, by far the sturdiest solution of the range and a new entry for 2016. Developed especially for endurance activity, it could also prove to be quite useful in some of the World Superbike races, especially on those circuits where a particularly resistant compound is required that can provide excellent support on the front with good grip. Choosing it today, in addition to race winner Chaz Davies, were Tom Sykes, Nicky Hayden, Michael Van der Mark and Xavi Forés, among others. The second most used option was the S1699 SC1 development solution, followed closely by the standard SC2. As for the rear, most of the riders, including the two Ducatisti Davies and Giugliano, opted for the standard SC0, in other words, the softest solution. Others, on the other hand, such as teammates Rea and Sykes, preferred the T0611 SC0 development solution that made its début right here at Imola last year. 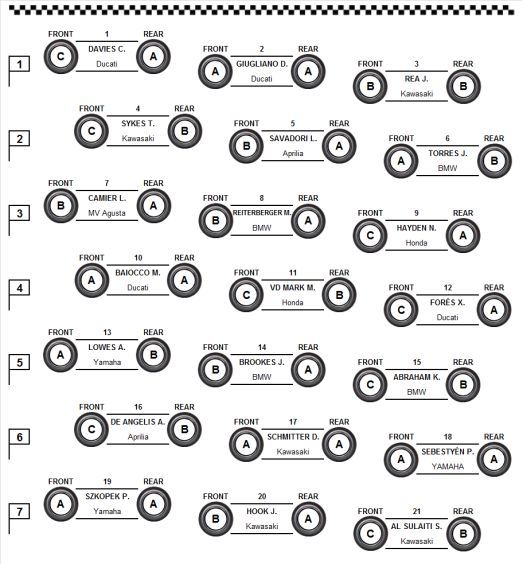 WorldSBK: A Ducati red Race 1 with a win by Chaz Davies, Pirelli pleased with the new standard SC3 solution, the most popular on the front
Newsroom